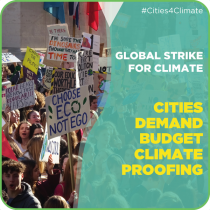 For the global strike for climate, city leaders representing the European Covenant of Mayors have come together to demand the climate proofing of budgets at an EU and national level. Climate proofing budgets is the best way of ensuring that everything possible is done to meet the EU’s commitments under the Paris Climate Agreement, achieve the promise of a carbon neutral EU by 2050 and avoid stranded assets as fossil fuel investments outlive their usefulness.

What is Climate Proofing?

Climate proofing is about analysing every euro committed and spent and assigning it a value in carbon emissions. In this way, spending in various government departments outside of the environment or climate departments does not undermine the spending done to mitigate and counteract climate change.

In practice, it means eliminating spending on fossil fuels and prioritising spending on efficiency first and renewable energy measures which will reduce emissions and lead to a more rational use of resources.

“Paris has already adopted its 2050 climate neutral strategy and measuring the climate impact of our entire budget is vital for success. We expect the European leaders to be as bold as we are at municipal level,” said Célia Blauel, Deputy Mayor of Paris and Board Member of the European Covenant of Mayors.

“Right now, we have a massive inconsistency in our spending across Europe. With the left hand we are digging deep to find the funds to support a shared energy transition, and with the right hand we are spending money on fossil fuel projects that makes a more sustainable Europe difficult to achieve,” said Prof. Dr. Eckart Würzner, Mayor of Heidelberg, Germany and Board Member of the European Covenant of Mayors.

“In light of the huge global challenge all of us face in meeting the 1.5°C target, we as European Mayors join our young citizens in their urgent call for action. We will act as their close allies and play our part by further intensifying efforts to make our cities - and Europe - climate neutral. We will work to achieve the Green Deal that we need - one that fosters climate innovation, promotes prosperous development, and creates opportunities for future generations,” said Anna-Kaisa Heinämäki Deputy Mayor of Tampere, Finland and Board Member of the European Covenant of Mayors.

“Climate proofing budgets is an effective way of changing our spending and questioning our model of development, in a way that is consistent with our Paris Agreement commitments. It is also a mechanism that can be used to track, on an annual basis on how we are doing in making the necessary changes. As local government leaders, we are committed to support the EU Commission in making our common ambition a reality,” said Juan Espadas, Mayor of Sevilla, Spain and Board Member of the European Covenant of Mayors.

“Our citizens are on the streets of our cities demanding action. We as city representatives have to listen to them and we are telling EU and national leaders that we need a consistent, ambitious approach to climate change and that climate proofing budgets is the fastest, cheapest and most logical way to deliver for our citizens,” said Andreas Wolter, Mayor of Cologne, Germany, acting Board Member of the European Covenant of Mayors.

What about the money?

The European Commission’s current proposal is that climate-related spending should be 25% of the next Multiannual Financial Framework 2021-2027 (MFF) – about €320 billion. But the impact of that amount will be reduced if other budget lines continue to spend money on projects which support or increase carbon emissions. According to Eurostat figures, government spending was 45.8 % of GDP in 2017 across the EU for a total of over €7 trillion euro – representing the most powerful mechanism available for safeguarding a Europe which lives within its carbon limits, and ensuring that money spent combatting climate change is as effective as possible.