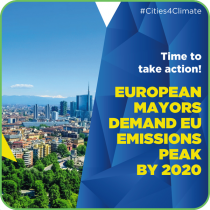 Mayors and leaders of 210 cities across Europe, representing 62 million citizens have today urged the European Council and Member States to step up the EU’s climate commitments, to show global leadership and drive ambition to make rapid progress in the implementation of the Paris Agreement.

The open letter, signed by leaders of cities in 21 EU member states and 7 neighboring countries was published ahead of the Future of Europe conference to take place in Sibiu, Romania on 9th May 2019.

"Climate change is a threat to all Europeans regardless of their social background or political beliefs. Mayors from large and small cities, right across Europe recognise the urgency of the challenge ahead and are implementing bold climate action on their streets. EU decision makers must set aside their differences to take the ambitious and courageous decisions needed on climate action. The future of Europe must be as a global climate leader. Future generations will not forgive us if we fail to act while there is still time." - Anne Hidalgo, Mayor of Paris and Chair of C40 Cities.

“I am very proud that many cities have already taken ambitious steps towards a net zero economy but limiting warming to 1.5C requires the involvement of all political levels. It is time that European and national leaders fully commit to and start working for a climate neutral Europe by 2050, together with our cities." - Anna König Jerlmyr, Mayor of Stockholm & President of EUROCITIES.

“Our citizens are taking to the streets, demanding more to be done. Our scientists in universities are telling us that the time for action is short. The target of a net-zero EU by 2050 is achievable if we act now. There is no time for further debate. The goal is clear and the time for implementation is now – we need EU leaders to recognise this and join with cities in driving a shared energy transition.” - Dr. Eckart Würzner, Lord Mayor of Heidelberg.

"Climate change is one of the greatest challenges we currently face, and the Paris agreement demands we confront it now. Cities, including Seville, are clearly determined to promote joint projects requiring funding and coordinated strategies in areas such as public transport, energy efficiency or waste reduction and enhancement through a circular economy. Cities are at the centre of climate change, but they are also the solution. Cities are committed but we need the support of the European Union and all its member states for more collaboration and more funding to research, innovate and share successful experiences.” - Juan Espadas, Mayor of Seville and CEMR spokesperson.

"Now is the time to act to avoid the worst consequences of climate change. We have to listen to science and take the IPCC report seriously - it is very likely that we only have until 2030 to limit climate change effects. We need a rapid and deep transformation to a more sustainable and just society for the benefits of our citizens, and should commit to a net-zero emissions target by 2050. Freiburg will continue to implement ambitious climate measures to safeguard the well-being of our and future generations." - Martin Horn, Mayor of Freiburg and Chair of ICLEI Europe.

“Bold action on climate change is vital to protect the planet for future generations. It also has the potential to improve the lives of citizens by creating jobs, cleaning the air and making our cities more inclusive. The #FridaysForFuture demonstrations have shown that young people across Europe want radical change to prevent climate catastrophe. The policies that we, as European mayors, are calling for today can deliver the sustainable, prosperous and inclusive communities that our children and grandchildren deserve to inherit. The City of Milan is committed to climate action, and I call on European leaders to match our ambition.” - Giuseppe Sala, Mayor of Milan & Vice Chair of C40 Cities.

“European Cities, through their ambitious climate plans and projects being implemented every day, have proven to be effective delivery agents for EU’s clean energy legislation. Now is time for the European Union to prove they are equally determined to stop global warming by adopting a long-term climate strategy aiming for net-zero emissions by 2050.” - Julije Domac, CEO of North-West Croatia Regional Energy Agency & President of FEDARENE.