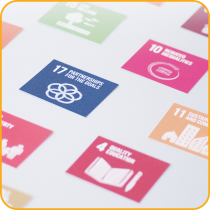 Just out: new study on how to assess the UN Global Goals on the ground

Towns and regions still lack financial resources to monitor the implementation of the Sustainable Development Goals (SDGs). This is one of the problems identified by associations of local and regional governments in a ground-breaking study carried out by PLATFORMA and the Council of European Municipalities and Regions (CEMR) on the evaluation of the actions taken to localise the UN Global Goals.

This study, entitled “Sustainable Development Goals - How Europe’s town and regions are taking the lead”, highlights the main challenges identified by associations of towns and regions, the top three being the lack of financial resources, the lack of data available at the local level and the lack of training.

But this fresh study is not only about identifying obstacles, it also collects good practices taken by associations and makes concrete recommendations on how to monitor the implementation of the SDGs at domestic and international level. This includes the nomination of local SDG ambassadors, the setting of indicators or awareness raising campaigns.

Representing CEMR and PLATFORMA, the Mayor of Soria (Spain), Carlos Martínez Mínguez, explains: “Today, cities represent the global leadership which allows people to be at the core of the 2030 Agenda.”

He adds: “There is no doubt that towns and regions, national governments, the European Union and international institutions can overcome obstacles together to achieve the localisation of the SDGs. However, local and regional governments need support, both financially and technically. This is the role that associations of towns and regions are playing, but they can’t achieve this alone.”

For Carlos Martínez, the study shows that by working closer together, everybody wins: on the design, implementation and monitoring of national SDG strategies. He also also called on all EU Member States to follow the Spanish example and include next year a chapter on local governments’ actions to localise SDGs in their Voluntary National Reviews to the UN.

This publication will be soon available in French.

Based on a survey sent out to national associations of local and regional governments, this study complements the Global Task Force’s 2nd Report to the High-Level Political Forum 2018, to which CEMR and PLATFORMA have also contributed.

This study was developed in the framework of the Strategic Partnership Agreement signed between CEMR-PLATFORMA and the European Commission.