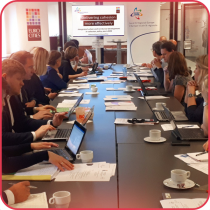 When President Juncker announced the proposal for the EU’s next long-term budget, the drastic cuts to regional funding came as a severe blow to Europe’s local governments. CEMR will not just stand by when local governments might lose up to 41 billion euros in essential funding for common European challenges such as job creation or the circular economy. Cohesion policy should not lose its place in the overall political debate. We therefore decided to join forces with EUROCITIES and meet representatives from Member states. On 14 May, we got together to find solutions on how cohesion policy can be delivered more effectively, despite the budget cuts.

Even if cohesion policy gets reduced, there are still important steps that can be taken to improve the way it works. Here are the points we shared with the Member States:

The Partnership Principle should remain legally binding, from the negotiation phase to implementation and monitoring. Local and regional governments should be more involved in the elaboration of a policy that affects them so much.

Europe needs a partnership agreement between the European Commission, Member States, and local and regional governments (or their representative organisations). This partnership would allow a closer link between cohesion policy and local needs, in the name of legitimacy, proximity and transparency.

EU policy and interventions should focus on the problems on the ground, in line with European societal challenges, regardless of whether an area is urban, rural or has any other geographical feature. Cohesion policy should not be a barrier to tackling territorial, socio-economic and demographic inequalities. This place-based approach would help recognise the diversity and potential of all territories. The instruments that are now available to local governments should be continued and improved: it should be made possible and simple to combine different funds (such as ESF, ERDF or EAFRD).

Those are the three most urgent points, but there are several other ways in which cohesion policy should be improved. For more details, read CEMR’s position paper on the future of cohesion policy: a simplified and integrated territorial approach.

Following the compelling discussions with the representatives from the EU’s Member states, CEMR will work on a position concerning the Commission’s proposal. We will share it with the Member states in the coming months. Despite the multi-billion euro cuts that await cohesion policy, we are confident that our solutions can help make this loss more bearable for Europe’s towns, cities and regions.