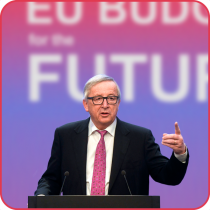 Cuts to regional funding: a severe blow for local government

European Commission President Jean-Claude Juncker unveiled his proposal for the EU’s next long-term budget, the so-called Multiannual Financial Framework, which will run from 2021 to 2027. At stake are drastic cuts in cohesion spending.

Reacting to the Commission's proposal, the President of the Council of European Municipalities and Regions (CEMR), President of Emilia-Romagna region, Stefano Bonaccini, stated: "by cutting cohesion policy by 7%, the Commission is seriously letting down Europe’s towns and regions. Even on the basis of 2018 prices, this will represent a loss of 41 billion EUR for local and regional governments for the 2020-2027 period."

CEMR President expressed his suprise that "on top of this, much more clarification is still needed regarding the future programmes and issues such as co-financing of cohesion projects. What does the Commission mean by saying it will increase national co-financing? Will all regions still be able to receive funding? What does the “rule of law” clause mean for local and regional governments?"

"But every cloud has a silver lining", Stefano Bonaccini pointed out, while underlining: "we are pleased that simplification and flexibility will be two pillars of the next cohesion policy, as towns and regions have long called for. Moreover, the Commission’s decision to include climate, digitalisation, transport or innovation as priorities is definitely a step forward. However, it still needs to say whether towns and regions will have direct access to this funding."

Building on its proposals, the Commission will present, in the weeks to come, detailed proposals for the future sector-specific financial programmes. The decision on the future long-term EU budget will then fall to the Council, acting by unanimity, with the consent of the European Parliament. An agreement should be reached before the European Parliament elections in May 2019.