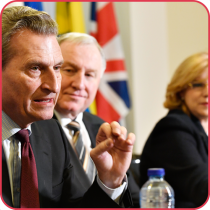 EU cohesion policy must continue to represent at least one-third of the EU budget after 2020 and support all of Europe's regions. Reducing it risks deepening divides in Europe and would undermine the future of the European Union. This message was delivered today by the EU-wide Cohesion Alliance (#CohesionAlliance) to the European Commission ahead of the publication of its draft future EU budget on 2 May.

Worth over €350 billion between 2014 and 2020, cohesion policy – implemented through the European Structural and Investment Funds – is the EU's main investment tool that works to reduce regional disparities, create jobs, open new business opportunities and address major global issues such as climate change and migration. It is the only EU policy that covers all of Europe's local communities involving local stakeholders to deliver growth strategies led by shared EU goals.

As a consequence of Brexit and the need for the EU to fund new priorities such as defense, security and external border control, the financial allocations for cohesion policy risks being cut in the next EU long term budget – or Multiannual Financial Framework – which sets the EU's expenditure ceilings for the period after 2020.

The Alliance demands that the EU budget after 2020 makes cohesion policy stronger, more effective, visible and available for every region in the European Union. Since its launch, the Alliance's declaration has been signed by more than 4000 individual signatories, 100 regions, 70 cities and counties, 50 associations of regional and local governments, 40 Members of the European Parliament, 30 EU sectorial associations.

"Cohesion Policy is traditional but not old fashioned. It will keep playing its role in the next EU budget. We cannot guarantee no cuts but our idea is to limit them to between 5 and 10%" said EU Budget Commissioner Gunther Oettinger, inviting all partners to mobilise and convince national governments that a limited increase of member states' contributions is needed for the EU to be up to its tasks.

EU Regional Policy Commissioner Corina Creţu, also stressed that: "This is probably the biggest, broadest grassroots campaign on behalf of cohesion policy ever. Through the cohesion alliance, thousands of beneficiaries of this unique policy, representing cities and regions as well as the health, education or business sectors, state loud and clear that Europe and cohesion policy are two sides of the same coin. Europe needs more cohesion".

The President of the AEBR and Minister-President of the German-speaking Community of Belgium, Oliver Paasch, said: "Border regions have made a smart use of EU solidarity addressing shared difficulties, building stable bridges between societies, based on trust, across national boundaries. EU cohesion policy should remain a basic piece of the European Project, addressing all territories and all essential policy areas, guaranteeing better coordination and a wider participatory approach for all political levels".

The AER President, and President of the Region Västra Götaland in Sweden, Magnus Berntsson said: "A strong renewed cohesion policy for all regions is central to the future of the European Union. Cohesion policy is and should remain at the core of the Europe. It is our most powerful tool, improving the quality of life of citizens. It promotes a unified, strong and competitive Europe through investments in both, developed, and less developed regions".

The President of CALRE Ana Luís, President of the Legislative Assembly of the Autonomous Region of The Azores in Portugal, pointed out that: "It is time to unite and converge for the defense of European Union’s fundamental principles, such as cohesion and solidarity. That is why CALRE joined the #CohesionAlliance from the beginning. Europe needs a strong and efficient cohesion policy, in each and all of its regions".

The CEMR spokesperson and Councilor of Malmö in Sweden, Ilmar Reepalu, declared: "The success of the EU's new priorities, such as social inclusion and climate action, depends on towns and regions' ability to invest in their territories. These investments cannot happen without cohesion policy. The EU should be consistent and make cohesion policy strong in the future budget".

CoR President Karl-Heinz Lambertz who stressed that: "If we want a Europe that invests in every community, that is more  effective, visible, less centralised and supports cooperation across borders, we need a strong cohesion policy for all regions and a bigger EU budget. Cutting it will have serious consequences for the prosperity and unity of the future of European Union".

An issue highlighted also by President of CPMR and of Portugal's Regional Autonomous Government of the Azores, Vasco Alves Cordeiro: “The future EU budget needs to reflect the ambition and priorities of the EU, providing regions with the flexibility they need to realise the political vision of the European Union for the future of Europe on the ground. Certain priorities can only be achieved by Cohesion policy”.

The vital role of cohesion policy was stressed by the President of EUROCITIES and Mayor of Ghent in Belgium Daniël Termont: "Cohesion policy is the glue that holds the EU together as we strive for a future that is more sustainable, inclusive, democratic and prosperous. Supporting innovation, cooperation and solidarity via a strong cohesion policy will help Europe remain a role model for the world around us for generations to come”.

The #CohesionAlliance is a coalition of those who believe that EU cohesion policy must continue to be a pillar of the EU's future. The Alliance was created through cooperation between the leading European associations of cities and regions and the European Committee of the Regions. It demands that the EU budget after 2020 makes cohesion policy stronger, more effective, visible and available for every region in the European Union.  From national, regional and local governments to SMEs, NGOs, schools, universities, cultural organisations, anyone who believes in EU cohesion policy is welcome to join the #CohesionAlliance by signing the declaration.

The photos of the event are available here.