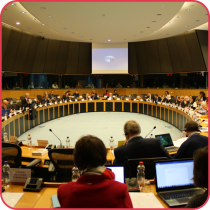 Thanks to the European Union’s cohesion policy, towns and regions all over the continent benefit from investments in sectors that are essential for our daily lives: from transport, energy and innovation to jobs and skills. And yet, cohesion policy is in danger of being cut after 2020 in the next EU spending plan.

That’s why we decided to defend cohesion policy’s future at the debate on this issue at the European Parliament on 1 February. Representing the interests of Europe’s local and regional governments, CEMR Secretary General Frédéric Vallier took this opportunity to present four key points that cohesion policy requires for the future.

1. After 2020, Europe needs a development strategy shared by all spheres of governance

Mr Vallier stressed that this ten-year strategy to define where Europe will be in 2030 should be “based on the goals set for 2030 in different EU policies, such as the EU 2030 Energy strategy. But it should also be in line with the UN Sustainable Development Goals.” This would give a strategic direction to the goal of economic, social and territorial cohesion, and also strengthen the EU internationally.

“We are happy to see it is already on the right track”, claimed the Secretary General, before adding that “it is essential to monitor the full implementation of the partnership principle.” In future, cohesion policy should involve the local level more: not only for consultation, but also, and much more importantly, for the choice of investment priorities.

Different places have different needs and different capacities. While this reality may seem obvious, it is not reflected in the top-down manner in which cohesion funds are allocated. In the future, cohesion policy should allow flexibility for different local contexts. Frédéric Vallier stated: “All areas’ needs should be taken into account: no town or region should be left behind. We are therefore in favour of using environmental and social criteria, instead of just using the GDP, to define how resources are allocated.”

The procedure to receive cohesion funds is so complex that some places can’t even access them although they would be entitled to. As stressed in the 7th cohesion report, the funds should be made simple and consistent for both beneficiaries and managers. “What we need is a one-stop-shop for all funds. This would allow a combined use of funds and facilitate integrated approaches. This goes hand in hand with more flexibility,” explained Mr Vallier.

You can find all the photos of the event here.

This debate was also the opportunity to hand CEMR’s new publication “Europe 2030: local leaders speak out” to the Members of the European Parliament’s Committee on Regional Development.

This unique piece of work of nearly 400 pages is the result of two years of discussions and debates within CEMR. It is a collection of ideas from more than 100 local and regional leaders, from all over Europe, and a synthesis of our thoughts and analyses.

To read a summary of the contributions, click here.

You can also webstream the full debate here (including Frédéric Vallier’s speech).