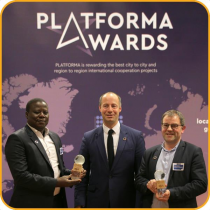 The towns of Roeselare and Dogbo win the first PLATFORMAwards

The towns of Roeselare (Belgium) and Dogbo (Benin) received the first prize of the PLATFORMAwards for their joint birth registration programme. After six years, Dogbo has become a reference in the field of civil registration in Benin, a country where more than 40% of births are not registered.
The ceremony took place on Wednesday 21 March at the European Committee of the Regions (CoR) in Brussels, in presence of Henk Kindt, Deputy Mayor of Roeselare, and Vincent Codjo Acakpo, Mayor of Dogbo, who were handed the award by Arne Lietz, Member of the European Parliament, and member of the Committee on Development (DEVE).
Without birth certificates, legally, children do not exist. Moreover, proof of legal identity is required to obtain a passport, open a bank account, have a driver’s license, to vote and access education and social security services.
The two cities will be rewarded with the production of a video to promote their cooperation project (video value fixed at €10,000).
The PLATFORMAwards aim to reward the best town-to-town and region-to-region development cooperation projects, promoting decentralised cooperation and collecting data and indicators from the best European practices.
This award is an initiative of PLATFORMA, the European coalition of local and regional governments – and their associations – active in town-to-town and region-to-region development cooperation.
For this first edition, PLATFORMA has received 25 applications, representing 42 decentralised cooperation projects from 75 local and regional governments from 30 different countries!

Please visit PLATFORMA’s website to read the rest of the article.

Traduire
In 2015, PLATFORMA signed a Framework Partnership Agreement with the European Commission’s Directorate-General for International Cooperation and Development.
• Check out #PLATFORMAwards on Twitter and follow @Platforma4Dev
• Discover the pictures of the ceremony on Flickr