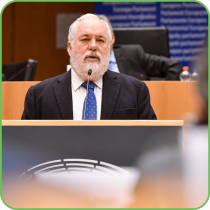 How can the Covenant of Mayors support the EU?


This opinion piece was first published by Euractiv.

The EU is currently undergoing a reflection process on its future priorities, in the midst of a debate about the fundamental nature towards which the European Union should evolve to. The redesign of the EU budget, which happens every seven years, raises now more than ever questions about where Europe should act and how it can deliver on its objectives.

Achieving social and territorial cohesion is a fundamental EU pillar, embedded in the Treaty and key to Europe’s stability and sense of Union. The EU budget has played a key role for this objective, through the European Structural and Cohesion funds.

Cohesion policy in particular has enabled many local and regional authorities across the EU to develop the wealth and societal fabric of their communities through inclusive green growth, an improved quality of life and a healthier environment.

Thanks to Cohesion Funding, many EU cities and regions have been able to increase and accelerate their action on tackling climate change and catalysing the energy transition.

The 9,000+ local and regional authorities that are part of the European Covenant of Mayors understand the added value of European funding. In the Italian Covenant region of Marche for example, regional development funds have laid the foundation for decarbonising urban transport by building new multimodal transport hubs for citizens to commute more efficiently by train, bus and bicycle.

The Polish Covenant city of Wroclaw, is one of hundreds of local authorities across Europe which have been entrusted with directly managing EU regional development funds, in order to develop and implement sustainable development strategies in partnership with all stakeholders.

Thanks to European funding, Wroclaw can invest in its low-carbon transition by building high-efficiency co-generation plants and modernising its rail network.

By 2020, European Covenant cities will have reduced their CO2 emissions by 27%, decreased their energy use by one fifth and increased local energy production by 90%, thereby exceeding the European Union’s 2020 milestone of cutting emissions by 20%.

Projections also show that the European Covenant of Mayors municipalities will have contributed nearly a third of the EU’s 2020 GHG emission reduction target.

This Thursday, at the European Covenant of Mayors 2018 Ceremony in the European Parliament in Brussels, we will take stock of these results achieved and commemorate the 10th anniversary of the initiative.

But more importantly, this gathering will be the opportunity to reflect on how success of the European Covenant of Mayors can be further embedded in EU policies, in order to support the EU at a turning point of its history.

The EU budget policy will guide the future direction of Europe. Achieving social and territorial cohesion through European funding, not only between member states and but also within them, is vital for ensuring that the EU remains an anchor of stability and sense of union for its citizens.

The bottom-up, multi-level governance model of the European Covenant initiative, in which European cities, regions, member states and EU institutions are engaged in a positive partnership characterised by dialogue, mutual interest and a win-win cooperation, is the political framework which should serve as key tool for the EU budget.

This continuous exchange between different governance levels enables Covenant cities, as governance level closest to citizens, to raise awareness about local needs amongst European and national decision-makers, and allows to tailor the initiative to fit local expectations.

It is this multi-level partnership model which should inspire the governance of the future European budget. By doing this, the distribution of European funding to foster social and territorial cohesion between and within EU member states could become more inclusive, coordinated and effective, by departing from and meeting local needs first.

This would also result in increasing local ownership and support for the EU, thereby giving new impetus to the European project and strengthening cohesion between the EU and its citizens.

But in order to take the initiative to the next level and assist the EU in achieving its objectives, it has to become a key instrument for the future European budget.