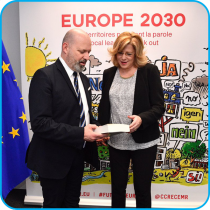 The future of Europe is on everyone’s lips. But where are the ideas to make it possible to achieve a safer, more prosperous and citizen-driven Europe? On 25 January in Brussels, the President of the Council of European Municipalities and Regions (CEMR) and of the region of Emilia-Romagna, Stefano Bonaccini, met EU Commissioner for regional policy, Corina Crețu, to give her CEMR’s book: “Europe 2030: local leaders speak out.”

The unique piece of work of nearly 400 pages that was launched today is the result of two years of discussions and debates within CEMR. It is a collection of ideas from more than 100 local and regional leaders, from all over Europe, and a synthesis of thoughts and analyses. These come at a crucial point in time, as President Juncker and President Macron invite all Europeans to think together about the future of our Union.

The authors expressed a number of ideas. To name a few: the creation of an actual European senate, true fiscal devolution and easier access to EU funding for smaller-scale projects.

As he presented the publication, CEMR President Stefano Bonaccini stated: “This century will be the century of communities, strengthened and recognised in their capacity to act. But in order to ensure Europe’s future in 2030 and beyond, to fight the impoverishment of peri-urban or isolated communities, and to ensure the vital link between its territories, Europe needs public investment! It is time to review austerity policies and to return to an ambitious development policy. To this end, cohesion policy should be put forward as the main investment policy, because it is the one through which citizens experience Europe.”

In the words of Commissioner Crețu, “this book represents Europe at its best; I mean by that: a "bottom-up Europe" in which those who make Europe a reality on a daily basis - our cities and regions, work together to come up with ideas and suggestions on how to improve Europe. I thank CEMR and its President Stefano Bonaccini for this timely initiative.”

CEMR Secretary General Frédéric Vallier concluded: “with “Europe 2030”, local leaders speak out to insist on the place and role local government must have in the future of Europe. Be it in safeguarding cohesion policy or in ensuring the Multiannual Financial Framework takes their priorities on board. There should be more space for public investment, the development of a European local, digital agenda and above all, solidarity must be made a core value of the European project,”

“Europe 2030: local leaders speak out” will be available in all good bookshops on Wednesday 31 January. Don’t miss out.

The photos of the event are available here.