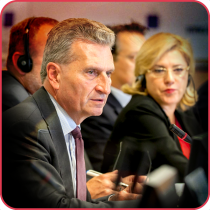 “A clear cut to cohesion policy would mean withdrawing local governments from the European project. It would prevent them, especially the smallest ones, from responding to EU priorities such as migration, digitalisation, the circular economy or energy,” claimed CEMR spokesperson on cohesion policy, Mayor of Sala (Sweden) Carola Gunnarsson, today at the Committee of the Regions (CoR).

Discussions revolved around the Commission’s Reflection paper on the future of EU finances and the scenarios presented in the document. Carola Gunnarsson voiced local governments’ concerns about “the clear threat for economic, social and territorial cohesion, as well as for rural development, which is currently financed via the Common Agricultural Policy.”

At CEMR, she expressed, "we believe that a reduced budget would have a very negative impact on local governments’ ability to fund territorial development projects."

The mayor of Sala also insisted that the financial instruments in cohesion policy (loans, guarantees or other risk-bearing mechanisms) should not replace European grants, such as European regional development and social funds, when funding projects on the ground:

“European funds are essential to boost public investment, for instance, in the area of education or integration. We believe that an increased use of financial instruments would be negative for the implementation of social projects, because a lack of no immediate economic returns or the difficulties to assess the results could prevent the private sector from investing.

For this reason, the use of financial instruments should be limited to viable economic sectors, such as support for SMEs or investments related to energy efficiency.”

CEMR and its member association will closely follow this issue in the coming months, including in Soria, at the occasion of the meeting of its Policy Committee and Retreat mid-January.

The future of cohesion policy, a simplified and integrated territorial approach

The #CohesionAlliance: New alliance born to defend the future of cohesion policy