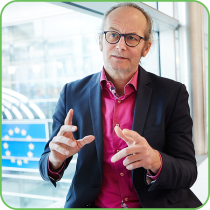 MEP Claude Turmes: "It is in the Commission and the member states’ interest to give broader responsibilities to towns and regions"

The Energy Union has a great potential for local sustainable economy, the creation of jobs and while protecting the environment. Europe’s local and regional governments are committed to become more energy efficient, achieve more sustainable societies and fight climate change, as proved by hundreds of mayors worldwide that signed the Paris Declaration (COP21).

But how they will be involved in the Commission’s project to transform the EU into a low carbon economy by 2030? To know more on this issue as well as on the state of play on the “Clean energy for all Europeans” package, we spoke with MEP Claude Turmes, rapporteur of the Governance Regulation of the Clean Energy Package.

Last November, the European Commission launched the “Clean energy for all Europeans” package. What’s the current state of play?

We are currently in the process of writing the European Parliament’s position regarding the Commission’s proposal. As rapporteur on one of the eight legislative proposals being discussed, the Governance of the Energy Union, I meet national governments and the parties concerned by the legislation in order to obtain an ambitious proposal that sets targets in line with the Paris Agreement from COP 21. We must reduce our energy consumption, develop intelligent networks and drastically increase the part of renewable energy in our energy mix in order to reach 100% by 2050 and thus have a chance to maintain global warming well below 2°C.

As rapporteur of the Governance Regulation of the Clean Energy Package, what are your main proposals concerning towns and regions in this process?

I am very much attached to multi-level governance, I think that it is in the Commission and the member states’ interest to give broader responsibilities to towns and regions. They are the ones acting efficiently at a concrete level to implement, on the ground, the goals that were decided at European level. Therefore, their participation needs to be made formal and anchored in legislation. This is visible each day with the 6,000+ local governments involved in the Covenant of mayors who develop advanced decarbonisation strategies. They are also active on air quality to offer a healthier living environment to their population.

How can the European Parliament ensure a structured and permanent dialogue with towns and regions on the governance of the Energy Union?

The Parliament must first take the body that represents EU towns and regions seriously: the European Committee of the Regions.  Members of the European Parliament (MEPs) themselves come from regional constituencies and are therefore particularly sensitive to local issues. Organisations such as the Council of European Municipalities and Regions, EUROCITIES, Energy Cities, Climate Alliance and the Covenant of mayors help nourish the debate. I am constantly listening to their concerns. In fact, that is why I delivered a speech on the question of governance on 24 April at the European Committee of the Regions.

What are the main funding opportunities for local government? Specifically, how could the EU support small towns and municipalities?

Take Luxembourg for instance: when a town does something, when it takes part in international commitments, its contribution is recognised and the town receives money from the central government. It would be interesting to imagine such a system being generalised to all of the European Union. The EU must value local engagement and financial incentives are part of that. For instance, making it compulsory to join the Covenant of mayors in order to access certain European funds seems like an interesting path to follow.

How can this package help fight climate change as defined by the Paris Climate Agreement?

This legislative package will only be able to efficiently fight climate change if it sets ambitious and binding targets for member states. The Commission’s proposal to set a renewables target at 27% is a real setback compared to current developments! This level does not allow the EU to fulfil the commitments it took in Paris. We need a target of at least 35%. The same goes for energy efficiency: the Parliament has spoken several times in favour of a minimum 40% target by 2030.

Now that the Commission has launched the debate on the future of Europe: what influence do you think this package will have on Europe in 2030? On a larger scale, what is your vision of Europe in 2030?

The future of the Europe of energy is played on three fields: efficiency, as it will allow a more reasonable energy consumption. The deployment of renewable energy, which is the only form of energy that uses abundant resources (the sun, the earth, the wind and water) without hurting the earth. The interconnections and flexibility of the electricity market (in particular thanks to stocking, as well as intelligent networks and to the erasure of demand) that guarantee the balance of a system fed by various sources.

On top of this comes another necessity: to give a price to carbon. Given the total failure of the ETS (EU Emissions Trading System), I suggest setting up a minimum price, first around 20 to 30 € per ton of CO2, and then increase it over time. Only if Europe takes into account these challenges can it claim to be the world leader in the fight against climate change, as it so often likes to do. We must understand the evolutions of energy. In a few years, consumers will be the producers of their own energy, and the national giants that trap us in outdated energy models will have to adapt, or they will risk disappearing. The Europe of the future must be the one that initiated the energy transition and its immense economic (jobs), social and environmental opportunities.