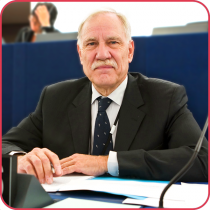 In order to have a global vision of this problem and to know what the EU can do to support local governments, we have interviewed Dominique Riquet, MEP and President of the intergroup on Long-term investment and reindustrialisation in Europe.

You used to be a mayor and you know local government. In your opinion, what are the main challenges that towns and cities face today?

Local governments have to provide their population with attractive public services and adequate solutions in terms of employment and housing, in the best possible conditions. But this is all done in the context of a crisis, with important consequences on towns and cities’ capacities, such as a reduction of direct revenue and state-allocated funds.

In a nutshell, you could say that more and more funds are needed, but less and less resources are available.

A great number of the EU’s policies take place on three levels of government: European Union, member states and local governments. However, it is up to the local level to find answers to some of the big issues discusses at European level, such as mobility, environment protection or digitalisation.

Consequently, if towns and regions’ skills in terms of financial engineering and operational skills are not sufficient, policies initiated at EU level will have no effect on the territories. ,

Could you present a few obstacles, at local and European level, concerning the implementation of these investments?

Obstacles to investment spread out through time. After having made investment decisions, a local government will have to know which assistance and trustworthy co-investment opportunities are available. As a result, it will then have to prepare applications that are in line with the demands of European co-investors, and possibly of member states. This implies local governments’ capability to manage the applications’ administrative and technical complexity.

According to you, what can the EU do to boost local public investment?

The EU could increase funding sources for local governments. At the same time, it seems essential to minimise the normative and administrative burden in the access to European funds. Another crucial aspect to boost local public investment is to inform local governments about opportunities given by European financial tools. The EU, in collaboration with member states, should allow local governments to find assistance when preparing applications, like the Juncker plan does, for instance, and also in the operational and financial follow-up.

Which difficulties do local governments face?

One major difficulty often met by local governments is the filter of the state. Depending on the project’s size, local governments will either have to address the European level directly, with the European Investment Bank (EIB) for instance, or be helped by the implementation regional, national, or even transnational platforms in order to have access to sufficient funds.

In order to make Europe’s towns and cities’ work easier, the EU must encourage member states not to add unnecessary administrative or normative layers.

Furthermore, I would like to stress that unlike the state, local governments do not have the option to present an unbalanced budget. Like with a household budget, public investments are calculated on the basis of total yearly revenue and expenditure. As a result, when looking at local government budgets, no distinction is made between funding by loans for investment expenditure and for operating expenditure.

What can you do within the European Parliament’s intergroup on Long-term investment and reindustrialisation to support local governments in setting up investments?

Within the intergroup, we defend the possibility for the EU to create funding mechanisms to support investments in infrastructure projects.

Along with structural funds such as the European Regional Development Fund (ERDF) through which the European Union supports economic development in all its member states in accordance with the goals of the Europe 2020 strategy, dedicated funds have been created.

Could you give us an example?

It is the case of the Connecting Europe Facility (CEF), that finds funding for projects in the fields of transport infrastructure, telecommunications and energy, that are of interest to the European Union. It aims to boost investment in trans-European networks and find funding from the public and private sector.

Moreover, we defend the implementation in the EU of mechanisms to guarantee project leaders with an added European value and respecting the additionality principle (a project that cannot be financed by the market alone) to benefit from more flexible borrowing conditions (low rates and a first loss guarantee). This is for instance the case of the guarantee for the European fund for strategic investments from the investment plan for Europe. The principle is to combine EU grants with loans or equity coming from public and private funding (leverage effect).

A few words on the Juncker plan…

Launched in 2015, the Juncker plan currently is currently under its first review. The Commission has suggested extending it beyond 2018 and to strengthen its mechanism by increasing its guarantee from 16 to 33.5 billion Euros (26 from the EU and 7.5 from the EIB) to generate 500 billion Euros in investment by 31 December 2020. In this context, I suggested setting up a coordination body between the Commission and the EIB to optimise and better calibrate EU investment support mechanisms. The idea is to create a body that would blend European grants (CEF, Horizon 2020, European structural and investment funds) with the EIB’s subsidy support mechanisms in order to make eligible projects more attractive on the market.

Translate
On 8 March 2017 the URBAN Intergroup and the Long-Term Investment and Reindustrialisation Intergroup (including its president Dominique Riquet) hosted a joint workshop led by POLIS and co-organised by CEMR and EUROCITIES at the European Parliament in Brussels entitled “Long-term investments: Barriers and opportunities for regional and local authorities”.