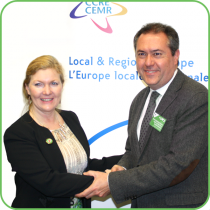 “To achieve a circular economy, small towns need help too.” That was the essence of the message delivered by CEMR’s new spokesperson for Environment and Lincolnshire councillor, Marianne Overton at our joint conference Waste legislation review: regions & cities for a circular economy at the European Committee of the Regions on 31 January.

Ambitious waste and circular economy legislation in the EU is not only essential for the future of our planet; it also enhances job creation in our towns and regions. According to the European Commission’s impact assessment, 443 million tons of greenhouse gas could be avoided and 180,000 direct jobs could be created by 2030. Local governments are all for it – why wouldn’t they be? The problem is, they need access to the necessary resources to make this ambition a reality.

Funds from the EU do exist, and local governments are willing to access them. However, towns with smaller capacities often meet too many obstacles when trying to access funds. One can imagine how difficult it might be for small town administrations to conduct in-depth assessments. Simplification and cutting red tape is therefore essential.

As Councillor Marianne Overton puts it, “We call for a financial framework that allows small towns to achieve EU targets. EU investment funds are great, but they are not adapted to thousands of towns and cities with smaller capacities.”

Access to funding was one of the key messages of CEMR’s position paper on the circular economy package adopted last year. To see all our recommendations, click here.

24 January: The European Parliament Committee on Environment (ENVI) voted to improve the circular economy package presented by the European Commission in 2015.

13 March: The European Parliament will vote on the circular economy package in a full plenary session in Strasbourg.

Traduire
Councillor Marianne Overton is vice-chair of the LGA for England and Wales, and also a member of CEMR’s policy committee.