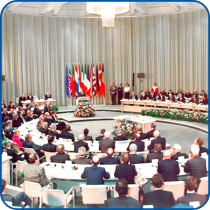 Precisely 25 years after the meeting that led to the signing of the Maastricht treaty, European mayors and local leaders meet in Maastricht at the occasion of CEMR’s Policy Committee. Here are 4 ways the treaty that created the European Union affected our towns and regions:

1.    The principle of subsidiarity was formally enshrined by the Maastricht Treaty

This principle means that decisions within the EU should be taken at the closest level to the citizen – the EU should not take on tasks that are better suited for local or regional governments. The Single European Act (1987) had already incorporated a subsidiarity criterion into environmental policy, however, without referring to it explicitly as such.

2.    The creation of the Committee of the Regions

Currently known as European Committee of the Regions (CoR), the EU’s assembly of local and regional representatives was established by the Maastricht treaty. The treaty also made it compulsory for the EU Commission and Council to consult the CoR on key areas of regional concern. As you may know, CEMR was instrumental in its creation.

3.    The right to vote and to be elected in local elections all over the EU

Since the Maastricht Treaty, all EU citizens residing in a Member State of which they are not a national have the right to vote there and to stand as a candidate at municipal elections.

4.    Creation of the Cohesion Fund

In the field of regional and cohesion policy, the Treaty created a new instrument, the Cohesion Fund. It is aimed at Member States whose Gross National Income (GNI) per inhabitant is less than 90 % of the EU average. It aims to reduce economic and social disparities and to promote sustainable development.

Our debate on the future of Europe

With the Maastricht Treaty reaching a quarter of a century, the time and place to ask this question is just right. A debate on this issue will be taking place at our Policy Committee on 12 December. It will revolve around two main questions: “What is the situation in Europe today and what future do we want for Europe?” and “What role for local and regional governments in the Europe of 2030?”

Who will be there? Among others, mayor of Brussels, Yvan Mayeur; president of the region of Emilia Romagna, Stefano Bonaccini; first vice-president of the European Committee of the Regions, Karl-Heinz Lambertz; and mayor of Fontainebleau, Frédéric Valletoux.

This debate will also be an opportunity to collect views and ideas for the CEMR paper on a common vision of Europe in 2030.