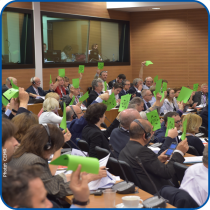 On 20 April 2016, the members of CEMR’s Policy Committee met in Nicosia (Cyprus) to discuss a number of issues. This meeting took place just before the CEMR congress, where over 500 European local elected representatives gathered to work together on some of the most pressing challenges facing European towns and regions.

After a lively and fruitful debate, the Policy Committee adopted a Declaration on refugees: the main aspects discussed were security, finances and integration. Once again, it was stressed that the role of local government is extremely important in dealing with the refugee crisis.

CEMR’s Spanish association, FEMP, presented a document on the topic of depopulation in Europe. The members took note of this presentation.

The Policy Committee’s next meeting will take place in Maastricht (Netherlands), from 12 to 13 December 2016 to celebrate the upcoming 25th anniversary of the signature of the Maastricht Treaty.