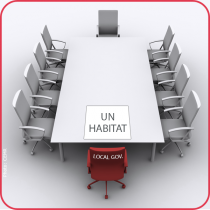 "Local governments need a seat at the negotiation table!"

These hearings gathered over 100 representatives of sub-national governments from around the world. CEMR and PLATFORMA took part as members of the Global Taskforce for Local and Regional Governments (GTF). Participants shared their vision for the New Urban Agenda, and to call for states to listen to cities at the final Habitat III conference in October in Quito (Ecuador).

What did CEMR and PLATFORMA say at the hearing? What are the main topics that were discussed?

CEMR and PLATFORMA were represented by Ilmar Reepalu, Councillor of Malmö (Sweden) and CEMR spokesperson on Urban Affairs, and Andreas Wolter, vice-mayor of Cologne (Germany) and representative of PLATFORMA.

One of the main points that CEMR and PLATFORMA underlined during the hearings was the importance of multilevel governance. In order for Habitat III to work, local governments need to be recognised as democratically legitimate policy makers, and as such, they need to be empowered on a financial and competence level. Moreover, the European multilevel governance model should be encouraged abroad, as it is currently the most efficient model, although it can still be improved, namely on financial aspects. In order to achieve these goals, it is essential to strengthen the role of subnational government associations.

The last main topic that CEMR and PLATFORMA addressed was decentralisation. As local governments will be implementing the New Urban Agenda, they need adequate funding. PLATFORMA stated that accessibility to development funds should be a priority. Currently, a large amount of funding meant for local development is channelled through NGOs rather than subnational governments, which PLATFORMA believes is inefficient and unproductive. CEMR stressed that towns and cities need access to resources, but their autonomy and the subsidiarity principle must be respected: as the level of governments closest to citizens, they have the legitimacy and know-how to act autonomously, and should have the legal ability to implement new funding mechanisms.

Traduire
The Local Authority Hearings on Habitat III in New York are taking place a few months before the Habitat III conference in October in Quito (Ecuador). Habitat III is the United Nations conference on housing and sustainable urban development worldwide, and takes place once every twenty years.