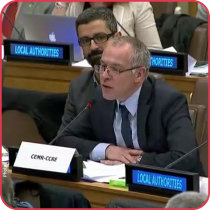 “The challenges [that cities and towns have to face] are numerous and we know them. From economic to human challenges, cities have to answer the needs of the local population as well as organising their own development capacities. Therefore, they are the best partners of national governments but they will be able to deliver only if they are empowered and financially equipped to tackle the challenges they face.”

CEMR secretary general, Frédéric Vallier, made these remarks during the informal hearings with representatives of local government associations, organised by the United Nations on Monday 16 May in New York.

The informal hearings are taking place during a meeting for over 100 representatives of sub-national governments from around the world at UN Headquarters in New York, from 15 to 17 May 2016. They are gathered to share their vision for the New Urban Agenda and call for states to listen to cities at the Habitat III conference.

CEMR secretary general Frédéric Vallier pursued: " But if the Habitat III conference could agree on a code of conduct to ensure good cooperation between national and local governments, this would certainly serve our objectives and the achievements of the SDGs and conclusions of the conference itself.”

These hearings are taking place shortly after the publication of the zero draft of the new Urban Agenda by the Habitat III secretariat. The final document will only be adopted at the Habitat III conference taking place in October 2016 in Quito (Ecuador). CEMR and PLATFORMA welcome the zero draft as it is very much in line with the declaration of CEMR and PLATFORMA and the Key Recommendation of the Global Task Force (GTF) for Local and Regional Governments (LRGs).

Traduire
On the eve of the Habitat III Local Authority Hearings in New York, local and regional governments are raising their voices to call upon national governments to take into account the work that local governments, civil society organizations and social movements have already done on the New Urban Agenda. We call for UN Member States to take note of the recommendations of these stakeholders during the Habitat III negotiations.