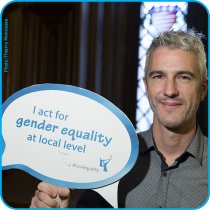 Today, 1500 towns and regions from 32 European countries are already taking action towards gender equality, for instance, by promoting gender diversity in municipal professions, like bus drivers, or by offering training programmes in schools to prevent gender-based stereotypes. This is why, in October 2015, the Observatory launched a toolkit to support these towns and regions to plan, monitor and evaluate gender equality policies. The new tool includes a set of 76 indicators covering areas such as employment, decision-making process or social care.

Despite local government efforts, several challenges remain, such as the lack of financial and human resources or non-adapted national institutional framework. To overcome these challenges, EU institutions must support fully policies developed by towns and regions. Otherwise the risk is that initiatives undertaken by municipalities, cities and regions will diminish or even disappear. Using this tool will therefore provide a real chance to achieve this goal: “We must ensure that this new tool does not remain hidden away in a drawer,” said Ibon Uribe CEMR spokesperson for gender equality.

In addition, locally elected representatives should be included in the implementation of the EU’s future strategy for equality that will frame European actions and policies to improve gender equality over the next five years.

The new tool will make it easier to identify needs on the ground and to set up suitable projects, such as the establishment of public bodies to ensure gender equality or the promotion of women in decision-making positions at local level.

“The toolkit will constitute a common framework at European level for local and regional governments to monitor gender equality policies,” said CEMR spokesperson on gender equality. This is why it is important for CEMR’s associations to undertake their responsibility and support the implementation of public policies. “Now it is our role to ensure that this tool is disseminated and used. This is our collective responsibility, the European institutions, CEMR member associations and we as politicians and experts at local and regional level,” stated Ibon Uribe.

The 76 indicators in the new toolkit have already been tested through a survey carried out to assess the state of play on the ground in the different EU member states. The results showed that progress has been made in many fields: 76% of the survey respondents indicated that they established a public body in charge of gender equality in the municipality; 63% carried out programmes focusing on the specific needs of women from socioeconomically disadvantaged groups (migrants and the elderly).

The toolkit and the indicators were developed in the framework of a 2-year project funded by the European Commission. The results of the project were presented at a final conference organised at the City Hall of Brussels on the 14 October 2015. This project was carried out in collaboration with the project partners ICF International and the Basque University (Spain).