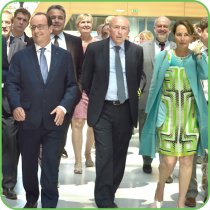 World summit on climate & territories: an unprecedented mobilisation of all non-state actors

Over 1400 participants from non-governmental associations and networks of local government, including CEMR and PLATFORMA, met at the World summit climate and territories in Lyon, on 1 and 2 July 2015. The meeting aimed to identify the commitments and recommendations of the territories ahead the summit on climate change (COP21) to be held in Paris by the end of this year.

The summit resulted in the adoption of the declaration “Placing territorial action at the heart of the response to climate challenge”, which states that local government’s fight against climate change is a key lever ahead of the international negotiations – which will result in a new legally binding, sustainable and universal climate agreement – and that only joint efforts to reach an ambitious agreement will allow real progress to preserve the balance of our planet.

Participants included: President of the French Republic, François Hollande, Mayor of Paris, Anne Hidalgo, Vice-President of the European Commission, Maroš Šefčovič, and the French Minister of Foreign Affairs and International Development, and President of COP21, Laurent Fabius. All of them reflected the journey made in the last years to recognise the non-state actors’ commitment against climate change.

CEMR was represented by its secretary general, Frédéric Vallier, who highlighted the need for collaboration among all non-governmental associations and local government networks worldwide. He also put forward the political impact of the summit since municipalities and regions are now heard as key actors to efficiently implement actions and offer solutions.

Frédéric Vallier also participated in a workshop on decentralised cooperation and territorial partnerships that was organised together with AFCCRE, Cités Unies de France, ENDA and PLATFORMA, on 1st July. By the end of the session, participants adopted a series of recommendations calling for an inclusive and ambitious cooperation, the mobilisation of innovative financing and the creation of the appropriate frameworks to fund cooperation programmes between territories. The conclusions will be passed onto the COP21 negotiators.

In her speech, Councilor of Ruddymede (UK) and CEMR spokesperson on environment Linda Gillham highlighted the crucial role that local government plays in the fight against a changing climate. She referred to CEMR’s commitment, which supports the target adopted by the European Union to reduce 40% of CO2 emission by 2030.

This summit represented a unique opportunity to have the voice of non-state actors heard ahead of Paris climate change summit. Furthermore it has shown that municipalities and regions worldwide are united in the fight against climate.