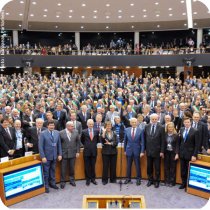 Faced with economic hardship, cities signatory to the Covenant of Mayors have still managed to allocate over €40 billion to their sustainable energy development.

Starting with a political commitment by the mayor signing the Covenant of Mayors declaration, cities invest in an ambitious agenda of local energy actions. They strive to bring better living conditions to citizens, benefit the local economy and create new jobs. EU funding, such as the structural funds, has an important role to play in facilitating this local sustainable energy development. Cities need the means to deliver their potential to curb climate change and to boost Europe's economic recovery.

Günther H. Oettinger, European commissioner for energy said: “The strength of the Covenant of Mayors is that it binds together all the local initiatives to deal with the energy challenges of the EU. These local initiatives are very promising. But we need to do more and faster and I want to help with that. For example, together with Commissioner Hahn we have increased the focus on energy efficiency and renewables in our regional policy.”

Mercedes Bresso, president of the Committee of the Regions, said: "The Covenant of Mayors is already a proven success. We believe the time is now right to take it to the next level: by activating sustainable energy investments through a more coherent link between the Covenant and EU funding possibilities and by broadening the scope to the whole resource efficiency agenda, in particular to water and waste management.”

Once a year, mayors gather in the heart of Europe to confirm their commitment to the Covenant of Mayors at its annual ceremony. With 263 mayors signing at this year's ceremony, the number of signatories rises to over 3000 cities – mainly from the 27 EU member states - representing over 140 million European citizens.

Each city signing up to the Covenant of Mayors commits to reducing CO2 emissions by over 20% by the year 2020, going beyond the EU 2020 energy targets. The combined CO2 emission reduction potential of the current signatories is 144 million tonnes per year.

The Covenant of Mayors is a European Commission initiative supported by the European Parliament and by the Committee of the Regions.