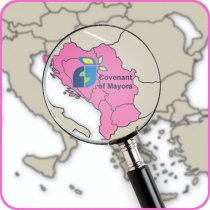 Call for extension of the Covenant of Mayors to Western Balkans

Indeed, approximately 50 local authorities from candidate and potential candidate countries (IPA) in the Western Balkans have already signed the Covenant of Mayors declaration, with the support of the European Commission. However, these local authorities require technical assistance and appropriate financial mechanisms so as to cope with the commitments engendered by the signing the Covenant.

Thus, the common declaration calls for the European Commission EuropeAid Cooperation Office (DG AIDCO) to launch an initiative for the Western Balkans similar to the soon-to-be-launched call for tender establishing a Covenant office dedicated to some Eastern countries.

The presidents and directors of NALAS met in Sofia on 14 and 15 June to discuss a number of topics such as the economic crisis and its effects on local and regional authorities, as well as energy efficiency.

At this occasion, CEMR Secretary General, Frédéric Vallier, reiterated CEMR's support to actions undertaken by NALAS and its members in working towards the recognition of local and regional autonomy in South-East Europe.