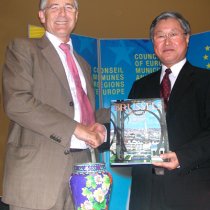 On 12 September 2005, for the first time CEMR received a delegation from the Chinese association of mayors in Brussels.
The delegation was led by the president of the Chinese Association of Mayors and Chinese Minister of Construction, Wang Guangtao; the aim of the visit was to explore the possibilities of future cooperation with the Council of European Municipalities and Regions, focusing on sustainable urban development.
Every year, between 13 and 18 millions Chinese leave the countryside and head for the cities, said Mr. Wang; such exodus puts our cities under tremendous pressure, especially in terms of urban planning and public services. Besides, China is experiencing a massive increase in motorisation: our cities must thus develop their public transport, with the view to save energy and to protect the environment.
We have already established good contacts with German, British and French cities, but we need CEMR. Through the Council of European Municipalities and Regions, Chinese municipalities could communicate with virtually all their European counterparts, to exchange experience and best practices.
CEMR secretary general, Jeremy Smith, pledged to report to CEMR member associations. The way China deals with its urban development is an issue that concers us all, he added; local governments in Europe and China would benefit from increased exchanges of good practice.
At the end of the visit, Mr. Wang invited Jeremy Smith and a CEMR delegation to visit the Chinese association of mayors, in Beijing, probably around beginning 2006.
The photo album of Mr. Wang Guangtao's visit to CEMR