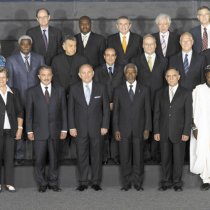 "We are by your side to reach the Millennium Development Goals". This is the gist of the message a delegation of mayors from across the world delivered to the UN secretary general, Kofi Annan, in New york on 9 September 2005.
The meeting with the UN secretary general aimed at asking for closer cooperation between the UN and UCLG, and at stressing that without the involvement of local government, the Millennium Objectives won't be reached. It took place a few days ahead of the world summit of heads of state and government (14-16 September) that aims at assessing the progress made towards achieving the Millennium Development Goals.
The delegation expressed the hope that the final document of the world summit will recognise the importance of local governments in areas such as governance, democracy, development...
Kofi Annan aknowledged the importance of local governments to reach the Millenium objectives: It is essential that you, who are so closely in touch with the daily lives and aspirations of the world's people, have gathered to offer us your views and your vision. How can we expect to reach these objectives without making progress in areas such as education, hunger, health, water, sanitation and gender equality? Cities and local authorities have a critical role to play in all of these areas. Ultimately it is in the streets of our cities and towns that the value of what's decided here will be tested. It is there, in the daily lives of our citizens, in their safety and security, in their prosperity and sense of opportunity, that our progress will be most visible. While our Goals are global, they can most effectively be achieved through action at local level. A state which treats local authorities as partners, and allows public tasks to be carried out by those closest to the citizens, will be stronger, not weaker. Weak cities will almost certainly act as a brake on national development, whereas strong local democracy can be a key factor enabling a country to thrive.
CEMR first vice president and mayor of The Hague, Wim Deetman, spoke on behalf of European local governments: We are here because we are facing a new era for local government as well as a new era for our relationship with the United Nations. Our first responsibility is to manage and develop our fast developing cities, towns and villages. We are committed to enhance effective decentralisation. This is why we want a close partnership with governments and with the UN. And this is why global governance is so crucial to achieving our shared development goals. Decisions must be taken by the government closest to the citizens. We are your ally. Wim Deetman's complete speech at the UN
"The Millennium towns and cities":
the local governments' contribution
United Cities and Local Government launched the "Millennium towns and cities campaign" last June. The campaign aims at supporting the United Nations Millennium Development Goals. Local governments are invited to ratify UCLG's local government Millennium Declaration, adopted by UCLG World Council, in Beijing, on 10 June 2005; they are also invited to display a white banner to municipal buildings, with the slogan 2015 : No Excuse! The World must be a better place. during the summit of heads of States and governments, in New York, on 14-16 September 2005.
Over 300 municipalities worldwide have joined the campaign. Among them, Vienna, whose mayor, Michael Häupl, is CEMR president. A white banner with the motto of the campaign has been displayed at the entrance of Vienna's city hall, and the municipality will host an event on the future of the Millennium Objectives, in the presence of the UN secretary general's special envoy, Eveline Herfkens, on 21 September.
The UN's Millennium development goals consist of a list of global anti poverty targets. These targets were adopted by world leaders at the UN Millennium summit in September 2000; they include halving extreme poverty and hunger, achieving universal primary education, reducing infant mortality rate, reversing the spreads of diseases such as AIDS and malaria, ensuring environmental sustainability...
Note: CEMR represents Europe's local government within United Cities and Local Government (UCLG).
Translate