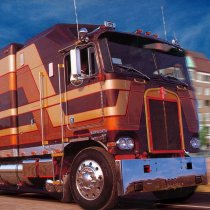 CEMR calls on European Parliament to vote against "mega trucks"

They pollute, they damage roads and they promote freight road transport to the detriment of rail transport: mega trucks should not be allowed in Europe! This is how CEMR secretary general Jeremy Smith sums up the Council of European Municipalities' call to the European Parliament ahead of the vote in the Transport Committee (on 26 June 2007).
In a letter to the members of the Parliament's Transport Committee, CEMR expresses Europe's local and regional government's concern at some aspects of the Commission's communication on freight logistics.
Heavy lorries of up to 60 tonnes are not adapted to the European road infrastructure, explains Jeremy Smith. It is beyond doubt that they damage secondary roads to and from motorways; and it is down to local and regional authorities to repair such damage without any compensation. Furthermore, such trucks pollute more than conventional heavy vehicles.
The Council of European Municipalities and Regions also believes that promoting very heavy vehicles goes against the European Commission's stated aim to promote rail transport in its White Paper on Transport: "mega trucks" decrease the cost of transport per unit and per kilometer; therefore they tend to increase the volume of freight road transport to the detriment of rail transport. In its White Paper on Transport, the EU Commission says it wants to promote rail transport, adds Jeremy Smith; but in its communication on freight logistics, it proposes measures that would detract freight transport from the rail to the road... Where is the logic?
More information on freight transport logistic in Europe (in 11 languages)
CEMR letter to the members of the EP's Transport committee