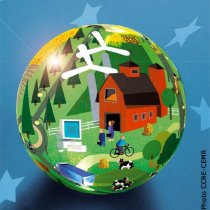 The Council of European Municipalities and Regions (CEMR) expresses serious reservations after the adoption by the European parliament of the resolution on 'Health Check" of the Common Agricultural Policy (CAP).
CEMR regrets that the Parliament is against more transfers from the 'first pillar" (support to agriculture) to the 'second pillar" (rural development). CEMR is disappointed that according to the European Parliament, any money spent for rural development needs to be directly targeted to farmers, declares CEMR's Secretary General Jeremy Smith. Supporting rural development needs measures beneficial to all citizens.To live in rural areas does not necessarily mean to work in agriculture. Therefore we need more investments in job creation and infrastructures to ensure rural development and to help ending rural depopulation.
CEMR shares the EP's position that the Commission's proposal goes in to the right direction and that it is necessary to secure appropriate financing for a sustainable policy for rural areas. However a progressive transfer from pillar one to pillar two woud be welcome.
We also share the EP's view that local actors have to be closely involved in the planning, implementation and monitoring process of the funds transfer. Rural development is first and foremost a local matter. A top-down approach would thus not be right declares Jeremy Smith.