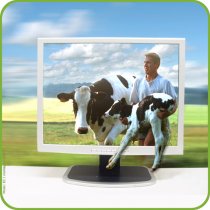 The Council of European Municipalities and Regions (CEMR) calls on the European Parliament and the Council to adopt the Commission's proposal to make a further € 1 billion available to spread high-speed Internet access more.widely across all regions of Europe, including rural areas.
In its Communication on 'better access for rural areas to modern ICT", adopted on 3 March 2009, the Commission underlines that an additional funding of €1 billion would allow rural areas to specifically address some of the problems they are confronted with as a consequence of the economic and financial crisis.
We hope that the European Parliament and the Council will adopt the Commission's proposal to make a further € 1 billion available through the European Economic Recovery Plan, says CEMR director of policy, Angelika Poth-Mögele. Local and regional government play an important role by helping to bridge the broadband gap and to stimulate broadband deployment and - as service provider - develop innovative broadband-based services.
In November 2008, CEMR adopted a policy paper on broadband infrastructure. It expresses its support for the Council of Minister's recommendation that the Member States should define ambitious targets for broadband penetration.
The policy paper also includes recommendations for local and regional government on how to prepare a sustainable ICT strategy and to implement the 'Digital Local Agenda". The DLA is a strategic plan for the development of the information society and eGovernment at local and regional level.
CEMR is currently preparing a Manual for the implementation of the Digital Local Agenda; a first draft will be discussed at the meeting of the CEMR policy group on Information Society and e-government on 12-13 March in Bilbao. The city will host the 8th EISCO conference (European Information Society Conference) in May 2010.
CEMR's activities in the field of the information society