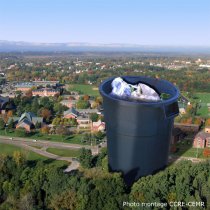 Though local and regional government must contribute to waste prevention and recycling , they must do so within a flexible framework. This is what the Council of European Municipalities and Regions (CEMR) calls for ahead of the vote on the revision of the waste directive by the European parliament's.Environment committee.
The Parliament's proposed targets for waste recovery and recycling* aim at making of Europe a "recycling society". However, says CEMR secretary general Jeremy Smith, these targets must take into account the different starting points in Europe's Member States as well as be flexible. There are vast differences between the 100,000 European municipalities: sizes, financial resources, infrastructure, technological progress... Binding targets covering all municipalities would therefore not make sense. Instead, CEMR is in favour of an overall objective, not specifically for local and regional governments, but on the total amount of waste produced within the whole of the EU.
Waste incineration...
The revision of the directive also aims at promoting energy recovery (burning waste in order to produce electricity and heat). CEMR is in favour of keeping one energy efficiency criteria to distinguish between incinerators that achieve energy recovery from those that do not. From an environmental and economic point of view, it is essential to promote energy recovery incinerators which cannot be placed at the same level as landfill.
... and biowaste
CEMR also calls for quality standards on biowaste. However, Members of the Parliament should not impose separated collection schemes within Europe's towns and regions. For such collection schemes to be successful, they must fit to local specificities and be voluntary, rather than emanating from a rigid, binding text.
*These targets aim at recovering and recycling 50% of household waste and 70% of construction and demolition waste by 2020. Countries that recycled less than 5% of their waste in either category between 2000 and 2005 would have 5 more years to reach the targets.
Position of the Council of European Municipalities and Regions on the Proposal for a European directive on waste
Translate