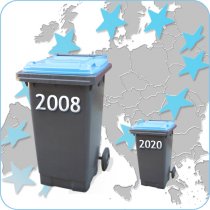 Waste directive: CEMR, Committee of the Regions and Economic and Social Committee speak with one voice

The Council of European Municipalities and Regions (CEMR), the Committee of the Regions and the European Economic and Social Committee (EESC) have adopted a joint statement sent to the members of the European.Parliament on the review of the waste framework directive.
The joint statement was issued ahead of the vote in plenary session in Strasbourg on 17 June. CEMR calls for MEPs to give without further amendments a broad support to the compromise package negotiated between the Council and the rapporteur of the European Parliament.
CEMR supports the proposed re-use and recycling targets. According to these objectives, by 2020, the preparing for re-use and the recycling of waste material shall be increased to a minimum of overall 50% by weight. These waste materials include at least paper, metal, plastic and glass from households and possibly from other origins.
These proposed re-use and recycling targets:
This is a well-balanced compromise between political vision and pragmatic solutions, says CEMR's Secretary General Jeremy Smith. It clearly states common goals that will help Europe move towards becoming recycling society.
The joint statement on the waste directive
CEMR's position on the review of the Waste framework directive
CEMR's activities on waste issues
Translate