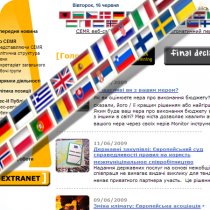 Since Tuesday 16 June 2009, the website of the Council of European Municipalities and Regions (CEMR) is available in 27 languages.
All new items will still be put online manually in English and in French, says CEMR.secretary general Jeremy Smith; however to these two "manual" languages, we have now added 25 languages in "automatic" translation. Our members in some 40 European countries, and their own members, will now have access to our website in their mother tongue, from Norwegian to Ukrainian, Portuguese, Greek and Slovak.
Since the translations are generated by a software and not humans, some language versions will contain unexpected results. Therefore, these translations should be conceived mainly as a tool to help users better understand the original English and French items.
I think this development should be seen as the first step in a long process, says CEMR head of press and communication Patrizio Fiorilli. Firstly, though the quality of translation varies from one language to another, users can suggest better translations and, over time, the Google software will learn from these suggestions; we liked the idea of letting our stakeholders gradually improve the glossary of local and regional issues in all languages.
On the other hand, since we are pionneers in this field, we expect other local, regional or international associations or institutions to follow us within a few months time, most probably adding improvements to what CEMR has just done. This would be tremendous: in time, every European citizen could access countless websites in her or his mother tongue, thus strengthening the concept of one common European culture.
Not the first time...
CEMR's website in 27 languages draws inspiration from NALAS' website that offer automatic translations in the languages of its members.
Also, end 2008, CEMR launched its "100% twinning" website, in 23 languages. However in the case of the town twinning website, the 23 language versions have been translated by CEMR'smember associations and its staff.
CEMR's member associations