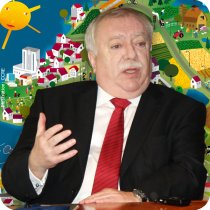 "Better living" for citizens must be included in European Union policies and strategies on top of economic growth factors, was the key message delivered by Council of European Municipalities and Regions (CEMR) President, Mayor and Governor of Vienna, Michael Häupl, during his visit to Brussels on 14 April.

Indeed, CEMR refutes the notion harboured by the EU that economic growth is the main crisis exit strategy. Instead, a new perspective of development should be developed so as to ensure a better quality of life for citizens through a bottom-up and territorial approach. Häupl argues that 'we won't get over the economic and social crisis with slogans. We need to be more ambitious in terms of policies and more in tune to the needs of Europeans".

The Cohesion Policy should for instance incorporate 'a wider set of criteria for its orientation and assessment to complement the traditional GDP-based indicators," as stipulated in the CEMR policy paper on the issue.

Häupl's main concern is the lack of vision in the new Europe 2020 strategy, which seems to be a mere list of technical initiatives and actions. Europe needs a strategy 'that clearly indicates the direction for sustainable development, creative industry, innovation and research".

The strategy remains unambitious, much like the current European Commission, which 'used to be the motor of the Community. We see that the new Commission is not really playing this role and we [at CEMR] are afraid that heads of state and national government are dominating the agenda setting of the EU," underlines the President.

The Lisbon Treaty and subsidiarity

While the Lisbon Treaty recognises the role of local and regional self-government and further extends the principle of subsidiarity to the local level, the Commission does not mention how it intends to apply these provisions in the policy and decision making process. This is more specifically the case in the Europe 2020 strategy, and more generally in the Commission 2010 work programme.

Indeed, in its -Register of Interested Representatives', the Commission still considers local and regional governments as "other organisations" along with academic organisations and religious groups, something CEMR can no longer stand to accept. Häupl maintains that it is high time a true system of multi-level governance was established, as declared in the Trio Presidency Agreement, signed on 17 March in Malaga. The President recalls the role CEMR played in the early 2000's, under President Valery Giscard D'Estaing, to enforce the principles of multi-level governance and subsidiarity in the Lisbon Treaty.

Under the Lisbon strategy, decentralised governments were not involved in the drawing-up of national action plans and were only expected to implement measures after they had been decided upon at the central level of government. This practice is unacceptable, as local and regional authorities are the level of government closest to the citizen and are therefore best placed to determine what is needed to stimulate employment and sustainable development. "The final Europe 2020 strategy, to be adopted in June, should therefore have a clear statement on their vital contribution to achieve the objectives at hand," as stated by CEMR President.

It is in this context that CEMR calls upon member states to organise consultations with all levels of government as well as with national local and regional representative organisations. CEMR also asks that the Commission set up a continuous dialogue with associations of European local and regional authorities.
Deutsche Fassung