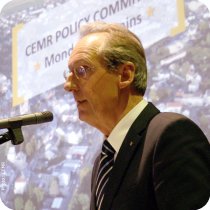 The Mayor of Stuttgart, Wolfgang Schuster, has been elected President of the Council of European Municipalities and Regions (CEMR) at the occasion of the CEMR Policy Committee held on 6 December 2010 in Mondorf-les-Bains, Luxemburg,.and hosted by CEMR's member association from Luxemburg, SYVICOL.
Mr Schuster, who is also President of CEMR's German section, identified a number of priorities including the strengthening of local democracy in Europe and of the political voice of European local and regional authorities and their national representative associations.

Upon first addressing the Policy Committee members, the newly elected President stated that CEMR 'should become an active partner in the Europe 2020 strategy as all the important challenges being dealt with at the European level are challenges also faced at the local and regional levels. Europe will only be successful if the political systems at all levels work together in the spirit of governing in partnership. CEMR could be the motor for a new European governance model by proving that new forms of cooperation based on contracts are an effective and successful means of solving our problems on all political levels."

'CEMR should also enhance its role as a forum of debate and cooperation between local and regional authorities in Europe, especially when considering that knowledge transfer and training for the qualification of local and regional administrations has proved successful, and notably so in the last twenty years."
Mr Schuster also identified among his Presidency priorities giving Europe a human face through the promotion of twinning projects and citizen involvement, as well as promoting and enhancing international solidarity via PLATFORMA, the European platform of local and regional authorities for development, hosted by CEMR.
President Schuster, who succeeded Mayor and Governor of Vienna, Michael Häupl, is to serve a three-year mandate.
More information on Wolfgang Schuster
The following nominations to the Executive Bureau by the Policy Committee also followed:
Co-Presidents
Aina Calvo Sastre, Mayor of Palma de Mallorca, member of the Executive Committee of the FEMP
Annemarie Jorritsma, Mayor of Almere, President of VNG
Executive presidents
Albert Bore, Councillor and former Leader of Birmingham City Council, President of the Committee of the Regions from 2002-2004
António Costa, Mayor of Lisbon
Anders Knape, President of SALAR, member of the City Council of Karlstad
Oldrich Vlasak, Member of the European Parliament and president of the Union of Czech Towns and Municipalities
Vice-presidents
Knud Andersen, Member of the Regional Council of the Capital Region of Denmark, member of the board of the Association of Danish Regions
Pedro Castro Vásquez, President of the FEMP, Mayor of Getafe (substitute nominated: Francisco León de la Riva, Mayor of Valladolid)
Gordon Keymer, Leader of Tandridge District Council (LGA-UK)
Ligia Krajewska, Deputy Chair of Warsaw City Council, Member of the Board of the Association of Polish Counties
Louis Le Pensec, President of the AFCCRE, former Minister, Deputy Mayor of Mellac
Erwin Mohr, Member of the Municipal Council of Wolfurt, member of the Board of the Austrian Association of Municipalities
Dagmar Mühlenfeld, Mayor of Mülheim/Ruhr
Romeo Stavarache, Mayor of Bacau, member of the Romanian Municipalities Association Steering Committee
Bülent Tanik, Mayor of éankaya, Ankara
Translate