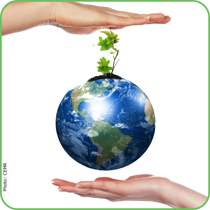 Study on the role of supporters as a lever for action

The Covenant of Mayors has released a new study on the role played by Covenant supporters in leveraging information and encouraging signatory municipalities.  The supporters, which notably help promote the initiative and support the commitments made by signatories to curb their CO2 emissions by at least 20% by 2020, have seen their own feedback included within the study.

How do the Covenant Supporters provide a link between the Covenant and its signatories? How many people were involved in the project in 2011 and 2012? You can find all the answers to these questions and more in the study, available in English.

Today, the Covenant of Mayors has a total of 82 supporters, 18 of which are CEMR member associations. The Covenant has over 4 000 signatory municipalities.

What’s  coming up next?

The Covenant of Mayors is to hold its 4th annual ceremony on 24 June 2013 in Brussels in parallel with the European Sustainable Energy Week.
A number of local and regional elected representatives, EU commissioners and stakeholders from the local, regional and European levels will attend the discussions and exchange experiences with participants. As the initiative enters its fifth year, the ceremony will be an opportunity to take stock of previous achievements and to anticipate future developments in the context of the economic crisis and unemployment.