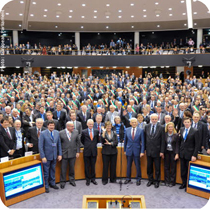 Covenant of Mayors cities act while others talk

Against the backdrop of the COP negotiations in Durban, cities signatory to the Covenant of Mayors gathered yesterday in the European Parliament's hemicycle to show that they are undertaking real action to improve their citizens' quality of life.

Over 1100 participants, including 356 mayors saw impressive city examples, amongst others from Sarajevo, Genoa and Bucharest, highlighting how implementing sustainable energy actions leads to local economic development and the creation of new jobs. Jerzy Buzek, president of the European Parliament, Mercedes Bresso, president of the Committee of the Regions, and European Commissioners, Štefan Füle (enlargement and European neighbourhood policy), Janez Potocnik (environment) and Johannes Hahn (regional policy) praised the cities' pioneering work and called for others to follow their example.

Brussels-region environment minister, Evelyne Huytebroeck, stated: “Today Covenant signatories are mobilised to shoulder our share of responsibility and fight against climate change. We measure our energy use and greenhouse gas emissions, we bring energy efficient solutions and we monitor results and progress.”

Mayor of Riga, Nils Ušakovs, said: “Europe's people are the real drivers behind smart, sustainable and inclusive growth. Local authorities should provide the framework for this to happen. By being part of the Covenant of Mayors, each and every individual in Riga can take part in Europe's smart energy transition.”

At the event, 263 cities signed the Covenant of Mayors, committing to reducing CO2 emissions by at least 20% by the year 2020, going beyond Europe's already ambitious energy targets for 2020. Special attention was given to the signature of Carmen Moriyon Entrialgo, mayor of Gijon (Spain), as Gijon is officially the 3000th city to join.

Gijon mayor Moriyon Entrialgo said: “Gijon has an ambitious agenda for local sustainable development and for strengthening its international cooperation. Instead of looking for innovative solutions individually, we think it is far better to work together with other European cities and to learn from their experiences. Therefore, we decided to join the Covenant of Mayors. We are very pleased to be the 3000th city to do so.”

Once a year, mayors gather in the heart of Europe to confirm their commitment to the Covenant of Mayors at its annual ceremony. More than 3000 signatory cities – mainly from the 27 EU member states - represent over 140 million European citizens. The combined CO2 emission reduction potential of the current signatories is 144 million tonnes per year.