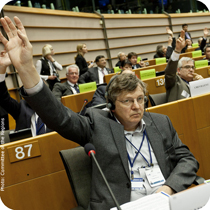 A call for action to Durban summit

As European cities steadily increase their efforts in the fight against climate change, Covenant of Mayors signatories urgently call on national leaders in Durban to show the same level of commitment and determination. This message, addressed to the delegates of the UN Climate Change Conference in Durban, South Africa, was unanimously adopted by some 400 mayors on 29 November 2011 in the hemicycle of the European Parliament in Brussels.

Addressing the audience at the occasion of the third Covenant of Mayors Ceremony, Evelyne Huytebroeck, minister for the environment for the Brussels Capital-Region, declared that “we, as representatives of European cities, are mobilised to shoulder our share of responsibility and fight against climate change. In return, ten days from now, at the close of the conference in Durban, we can only hope for the same level of determination from participating states, and we look forward to their encouraging message”.

In a climate of uncertainty and scepticism with regard to the future of the Kyoto Protocol, which is to be sealed next week in Durban, she also insisted on the urgency to find a “quick and lasting solution to combat climate change”.

The statement, which also received prior support from networks of local and regional authorities  supporting the Covenant of Mayors, was endorsed by the 400 mayors attending the ceremony.

Evelyne Huytebroeck is to attend the COP17 summit in December where she will deliver the message in person and seek to restore faith in the post-Kyoto process.

After the adoption, in 2008, of the EU climate and energy package, the European Commission launched the Covenant of Mayors to endorse and support the efforts deployed by local authorities in the implementation of sustainable energy policies. Signatories having voluntarily committed to the Covenant of Mayors, aim to meet and exceed the EU 20% CO2 reduction objective by 2020. Over 3,000 mayors have signed the Covenant since its launch in 2008.

Organised each year in the hemicycle of the European Parliament, the Covenant of Mayors Ceremony is the annual turning point during which cities and regions confirm their commitment to the initiative.