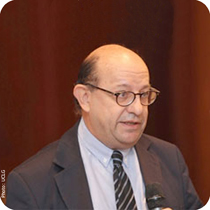 United Cities and Local Governments (UCLG), whose European section is the Council of European Municipalities and Regions (CEMR), elected Josep Roig as UCLG secretary genera at the occasion of its Executive Bureau. meeting held from 22 to 24 June 2011 in Rabat, Morocco.
Roig is currently secretary general of Metropolis, an international organisation of major metropolises, and has been actively involved in UCLG's metropolitan section since 1985. He will be assuming his responsibilities starting September 2011.
Moreover, the UCLG Executive Bureau, which brought together over 200 elected officials from some 40 countries, agreed to create a Standing Committee on Gender Equality in order to push forward the participation of women in local decision-making and in UCLG's work. (See CEMR's European Charter for Equality of Women and Men in Local Life)
Also discussed were the positive developments in UCLG's relations with the United Nations, the introduction of culture as a pillar of sustainable development, the renewal of the UCLG aid effectiveness agenda and the issue of health and access to basic services.