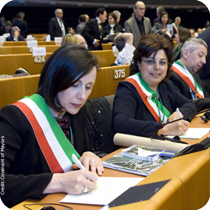 500 local and regional governments commit to reducing their CO2 emissions

Over 1500 European mayors gathered at the European Parliament in Brussels on 4 May at the occasion of the 2nd Covenant of Mayors Ceremony, which saw 500 mayors sign the Covenant declaration committing to reducing their CO2 emissions by 20% by 2020.

The initiative, notably supported by European local authority associations, such as the Council of European Municipalities and Regions (CEMR), commits local and regional governments to go beyond EU climate change goals. Thus, through individual Sustainable Energy Action Plans, municipalities and regions aim at saving energy, promoting renewable energies and raising citizen awareness. This bottom-up approach encourages local governments to share a common goal in the fight against climate change and to develop concrete measures stimulating investments at the local level.

The amount of funds available for energy efficiency and sustainable energy projects will be significantly increased, EU Energy Commissioner, Günther Oettinger announced at the Covenant ceremony. Indeed, a large percentage of the unused money left over from the EU recovery package, a figure of at least €115 million, will be made available to support local and regional authorities.

CEMR and the Covenant

CEMR plays an active role in the promotion of the Covenant through its participation in the Covenant of Mayors Office, whose task is to help local and regional governments fulfil their climate change commitments.

CEMR notably encourages public administrations and local and regional authority networks to become supporting structures. These structures, of which there are currently 65, provide strategic guidance as well as financial and technical support to municipalities with the political will to sign the Covenant but which lack the skills or resources to fill the requirements. Three of CEMR's member associations, the Romanian Municipalities Association (AMR), the Maltese Local Council's Association (LCA) and the National Association of Portuguese Municipalities (ANMP), are so far Covenant supporting structures.