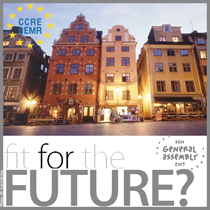 "Get prepared to face tomorrow's challenges"

How can local and regional governments prepare for today and tomorrow's challenges? This will be the main theme of the general assembly of the Council of European Municipalities and Regions (CEMR), in Malmö, from 22 to 24 April 2009.
One of the main objectives of the CEMR's General Assembly will be to identify today and tomorrow's challenges that directly affect our towns and regions. It will also aim to see how to successfully overcome these challenges. What can be done at the local level to tackle climate change? How to ensure and develop public services of quality? What is the state of local democracy in Europe? How to encourage modern town twining of quality, and exchanges that implicate all ages of the European society? These will be some of the questions which will be addressed during the General Assembly.
The first day will focus on international and European challenges that municipalities and regions will have to face.
The second day will be devoted to parallel and special sessions on democracy and governance, quality services and demographic changes, the new European cohesion policy, town twinning and active citizenship and decentralised cooperation.
A plenary session will be held on the third day to address the ever-increasing issue of climate change. The General Assembly will conclude with the adoption of a final declaration by locally elected representatives from hundreds of municipalities, towns and regions.
Background information
The General Assembly of the Council of European Municipalities and Regions (CEMR) takes place every three years. It brings together representatives from hundreds of local and regional governments across Europe and beyond. The CEMR's 2006 General Assembly was on the future of public services in Europe and ended up with the Innsbruck final declaration.
Practical information
Dates: 22-24 April 2009
Venue: Malmö Tourism, Lugna gatan 84 VII, 21159 Malmö, Sweden
Distribution of second announcement: October 2008