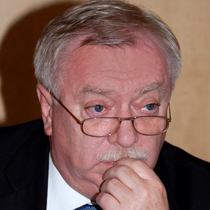 The mayor and governor of Vienna Michael Häupl has been re-elected president of the Council of European Municipalities and Regions (CEMR) at CEMR's policy committee meeting in Stuttgart on 4 and 5 December 2007.

I believe that together we have succeeded in making our voice heard more strongly over the last years, said Michael Häupl. I want to continue on this path together with you as president of CEMR.
Michael Häupl's priorities for his second mandate will be to strengthen the role and contribution of local and regional governments in Europe, to promote town twinning as a tool to strengthen European citizenship, equal opportunities and local and regional democracy. He also emphasized the importance of local public services in accordance with the principle of subsidiarity.

Michael Häupl also paid tribute to the work of mayor of The Hague, Wim Deetman, who was CEMR's first vice president since 2004. Wim Deetman will be succeeded by Anders Knape , president of the Swedish association of local and regional authorities and Karlstadt local councillor. Until now he has chaired CEMR's working group on twinning.

The mayor of Stuttgart, Wolfgang Schuster, has been elected European vice president of the world association United Cities and Local Government (UCLG).

Seven vice-presidents have also been elected:
The new chair of CEMR's committee of women elected representatives of local and regional authorities will be Jocelyne Bougeard, deputy mayor of Rennes (F).

The Policy Committee also extended the mandate of the secretary general, Jeremy Smith, until 2009.
A political debate and a Declaration on mobility
The members of the policy committee also engaged in a debate on urban mobility. They agreed that the ways forward to improve mobility while saving energy and cutting emissions of CO² are mainly to change attitudes concerning the use of cars and to improve public transport.

EU Commissioner for transport Jacques Barrot's message to the delegates underlined the necessity to shift long-distance freight transport from road to railways and waterways: This cannot be done without investments in alternative solutions to transport by roads. I have recently allocated €5.1bn in 78 priority transport projects, three quarters of which are dedicated to railways.
Jacques Barrot also called for 'greener roads", with cars producing on average 120 grams of CO²/km, with a genuine European biofuel strategy based on a dialogue involving all stakeholders: farmers, car manufacturers, retailers and the oil sector.
Wolfgang Schuster, spoke about the 'magical triangle" to reach sustainable mobility: this triangle is made from three key points: take environmental measures, add to them a social dimension, and involve the business community. I do not believe in negative, coercive measures; positive measures are more efficient, such as improving our public transport in order to entice people to use them more, or free public transport for children and young people in order for the next generation to find it totally normal to leave the car at home and to use public transport instead.
Jacques Auxiette, president of the Pays de la Loire regional Council, and of CEMR's transport committee, supported that approach and illustrated it with examples from France: Yes, it is about changing attitudes and about investing in tomorrow's generation. A number of initiatives are already implemented, one of them does not only offer young people a 50% discount on public transport fees, it also allows them to travel with up to five people at the week-end, and their 'guests" benefit from the same 50% discount. Traveling by public transport then becomes much more attractive, economically and socially.
Representatives of car manufacturer Porsche took part in the debate. They called for improved ways to calculate which car manufacturers pollute more. To simply look at the overall fleet of each manufacturer and calculate the average emission of CO² is not reliable, they said. One should compare what is comparable, in this case we should compare only the sport and luxury models' emissions of CO². When you do this, you find that Porsches pollute less than their comparable competitors.
Karl-Otto Schallaböck, from the Wuppertal Institute for climate, environment and energy stated that the main challenge will be to cut consumption by cars: In Germany, cars are the main CO² emitters; they are becoming heavier and heavier and therefore they consume more and therefore emit more.

The mayor of Gdynia (PL) Stanislaw Szwabski stressed that in a number of European countries, possessing a car is still a symbol of freedom and of higher social status. He also expressed the view that improving public transport and changing attitudes must go hand in hand in order to improve mobility.
The policy committee adopted the Stuttgart declaration on urban mobility. It includes the regret that the EU Commission's Green Paper on urban mobility has again diluted one of the essential objectives of the original 2001 White Paper on Transport, i.e. the need to decouple transport growth from economic growth. CEMR policy committee also asks that the structural funds take into account the principles of sustainable mobility and that the European Union mobilises its financial instruments, especially with the help of the European Investment Bank, to support local and regional authorities with their investments in public transport.
Local and regional government's view on the Lisbon Treaty

Finally, the policy committee adopted a declaration on the Treaty of Lisbon. In it, CEMR welcomes the treaty, in particular the points that strengthen the role of local and regional government within the EU. It adds that this consideration of the local and regional dimension in the Treaty is not a symbolic reference, but has real meaning and legal consequences, including on issues regarding the role and management of our public services.
The declaration also welcomes the new protocol on services of general interest (public services), especially the article that states that the shared values of the Union in respect of services of general economic interest ... include in particular the essential role and the wide discretion of national, regional and local authorities in providing, commissioning and organising services of general economic interest as closely as possible to the needs of the users.
The Stuttgart Declaration on the Treaty of Lisbon
The Stuttgart declaration on urban mobility (in German)
EU Transport Commissioner Jacques Barrot's message to CEMR (in French)