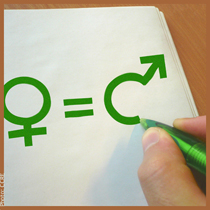 500 European municipalities, cities and regions have now signed the charter for equality of women and men in local life, launched by the Council of European Municipalities and Regions (CEMR), in May 2006.
The 500th signatory is the German city of Westerstede, in Lower Saxony. By signing the charter, the city commits itself to promote gender-based equality and implement the principles of the charter in its constituency. These include the balanced participation of women and men in the decision making process, the assertion that a gender perspective will be taken into account in all activities of local and regional government, and the drawing up of action plans adequately funded to reach the objectives laid down in the charter.
Less than one year ago, over 100 municipalities and regions had signed the charter, says CEMR president and mayor and governor of Vienna, Michael Häupl. Today the milestone of 500 signatures has been reached, which pleases us enormously. The signatories include cities and capitals from 15 countries around Europe such as Athens, Vienna, Zürich, Bilbao or Nantes. Many regions including Brittany and Midi-Pyrénées in France, or Tuscany and Lazio in Italy have signed the charter too.
Michael Häupl however recalled that the charter is not an end in itself, it is merely a tool. What matters is not only how many towns or regions sign it, but more importantly that local policies in favour of gender equality are implemented across Europe. This is the reason why, since early 2007, we have undertaken together with the European Commission a project to implement the charter. Michael Häupl also called on all elected local and regional representatives to sign it, to implement its principles and to publish it in their constituency.
The chair of CEMR's committee of women elected of local and regional representatives, Vicenta Bosch Palanca, said: This charter is a tool to reach our ambitious targets; it is a political document and instrument. It also shows that the issue of equality is linked to most local policies, and that municipalities have a role to play towards a genuine equality between women and men in Europe.
Implementing the charter for equality
The 500th signature coincided with the second meeting of the project on the implementation of the European Charter for equality, in Kuopio (Finland), on 10-11 September 2007.
Some 60 participants from 17 countries Europe studied examples of different approaches to implementing the Charter (or specific articles of the Charter), on the ground, and held a debate on that issue.
Speakers include the mayor of Kuopio, Petteri Paronen, Finland's state secretary to the ministry of gender equality, Stefan Johansson, the local councilor of Kuopio and member of the board of the Finnish association of CEMR, Sari Raassina, and the chair of CEMR's committee of women elected representatives of local and regional authorities, Vicenta Bosch Palanca.
The final conference of the project will take place in Pisa (Italy), in February 2008.
Background to the charter
In 2005, with the financial support of the European Commission, CEMR launched a project on "The town for equality". That project aimed mainly to collect best practice cases of gender equality in European local governments as well as at setting up a methodology to help local representatives achieve true gender equality in their municipalities.
The charter itself is the continuation of that previous project. Its aim is to encourage local politicians to sign it, thus committing themselves publicly to implement the measures in the charter in their municipalities.
Both projects, the drafting of the Charter and the implementation of the charter have the financial support of the European Commission too.
The European Charter for equality of women and men in local life (in 15 languages: cestina - Deutsch - eesti keel - ελληνικά - English - español - euskara - français - italiano - latviesu valoda - Nederlands - português - slovenčina - suomi - svenska)
The list of municipalities, towns et regions having signed the charter
The presentations made during the meeting of the project on the implementation of the European Charter for equality, in Kuopio