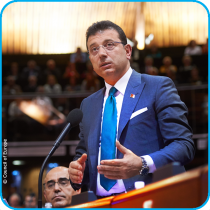 The President of the Council of European Municipalities and Regions (CEMR), Gunn Marit Helgesen, expresses strong support for Ekrem İmamoğlu, Mayor of Istanbul, sentenced to two years and seven months in prison.

"The Council of European Municipalities and Regions (CEMR) is deeply concerned to learn that a Turkish court has sentenced the Mayor Ekrem İmamoğlu of Istanbul to more than two and half years in prison on charges of insulting members of Turkey’s Supreme Electoral Council as widely reported in the international press.

We condemn in the strongest possible terms this conviction handed down to our colleague and furthermore, we denounce the political ban that may lead to his removal from office. Mayor Imamoglu is an elected official whose actions do not warrant this repressive and disproportionate verdict.

CEMR has been following closely events in Turkey the past years and finds the unacceptable treatment of local elected politicians highly disturbing. These events have no place in a democratic society, and we would urge the Turkish judicial system to reverse this unjust decision.

CEMR supports democratically elected politicians whose legitimate mandate stems from their election by their citizens. We stand firmly in solidarity with local leaders in Turkey and across the world in their fight for freedom of speech and local democracy."