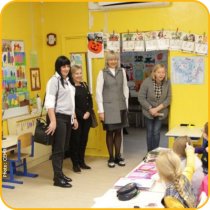 On 23-27 October 2022, representatives from the Ukrainian municipality, Zboriv, visited their Lithuanian partner, the district municipality Joniškis. The visit was organised in the framework of the CEMR-PLATFORMA project "Bridges of Trust: Empowering municipalities in Ukraine and in the European Union through building municipal partnerships". The project is supported by the U-LEAD with Europe programme.

During the visit, working meetings between the Ukrainian representatives, the Mayor of Joniškis, Vitalijus Gailius, and the municipal officials responsible for different sectors such as: social services, communal services, youth, education, and healthcare.

In the Open Youth Center of Joniškis School of Art, the participants of the visit got acquainted with the center's activities, its volunteers, and the ongoing projects. The delegation also visited the Joniškis Agricultural School, where the director of the school, Juventa Jurgelienė, presented the training center, educational farm, and modernized laboratories. In the Child and Family Welfare Center, the provided services were presented, and similarities and differences between the provision of such services in Joniškis and Zboriv were discussed in order to highlight best practices to implement in the future.

A particularly insightful part of the trip was a visit to the Seimas and the Government of the Republic of Lithuania, organised by Joniškis for the partners from Ukraine. The delegation exchanged with the politicians on the humanitarian support, the reception of Ukrainians fleeing the war in other countries and other relevant issues.