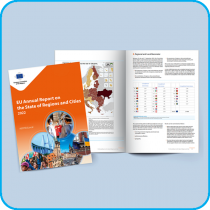 Hot of the press: the 'State of Regions and Cities in the European Union'

Did you know? The Committee of the Regions published its EU Annual Report on the State of the Regions and Cities, as a snapshot of the most pressing challenges faced by regions and cities across the Union, that helps to inform EU policy decisions.

This year's report focuses on the most pressing challenges that EU cities and regions are facing: the economic and social consequences of Russia's war against Ukraine, the lasting effects of the COVID-19 pandemic and the necessary recovery, the climate emergency and energy transition, the fight against inequalities, and the future of democracy building on the conclusions of the Conference on the Future of Europe.

Available in 23 languages, the report will also feature its "Regional and Local Barometer", presenting the views of elected representatives from across Europe surveyed in partnership with IPSOS.

The crucial importance of cohesion for EU’s local communities is fully confirmed by the results of the CoR Regional and Local Barometer: 88% of respondents agreed that cohesion should be among the key values of the European Union.

More startling is the fact that one in ten of respondents stated that they were either fully involved (1%) or partially involved (9%) in the drafting of the National Recovery and Resilience Plans.