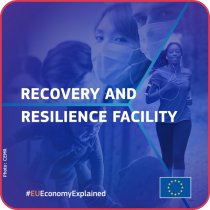 In 2020, faced with the unprecedented Covid-19 pandemic, European Union (EU) leaders and the European Commission put in place an equally unprecedented response package: Next Generation EU. It allows the EU to borrow large amounts of funding from the financial markets and to allocate these to Member States. The Next Generation EU’s centrepiece, the Recovery and Resilience Facility (RRF), provides grants and loans over a period of 5 years, amounting to €724 billion (in current prices) in total, to support the rebound of EU economies following the pandemic.

EU Member States have been required to submit national Recovery and Resilience Plans (RRPs), which outline their respective investment and reform strategies for using the RRF financing. The RRPs should outline a 5-year reform and investment strategy and set the pace of transformation needed for robust and fair digital and sustainable transitions. Member States have recently been given the opportunity to adapt their national plans to consider the new challenges thrown up by the war in Ukraine and its impact on the cost of energy supplies.

Since early on in the process, CEMR and the European Committee of the Regions (CoR) have worked together to push for the fullest and most meaningful involvement of local and regional governments (LRGs), both in the design and the implementation of the Recovery and Resilience. An initial study produced jointly by the CoR and CEMR and published in January 2021 highlighted the early efforts of LRGs to be involved in the preparation of the RRPs.

The results demonstrated the extensive problems experienced by LRGs, the lack of consultation on their national RRPs and even on the occasions where they were consulted, their contributions were often overlooked.

In May 2022 CEMR and CoR prepared a follow-up study, to explore the extent to which the situation had evolved positively and whether or not LRGs felt that their involvement in the implementation of the RRPs had improved. The results of this follow-up study were more mixed but the general feeling was that LGRs were concerned that the lack of partnership arrangements in delivering the RRPs was leading to less effective delivery of the RRPs on the ground.

Member States are advancing with the implementation of their national recovery plans, setting out both new investments and reforms, and consequently a considerable amount of RRF funds have now been disbursed. It remains noticeable however, that a significant amount of the loans available remain unrequested by Member States. While there is potential for synergies between cohesion policy and the RRF, there is also the potential for overlap and a competition for funding due to insufficient coherence between the different instruments. Concerns are growing that prioritising the RFF could lead to a reduction of cohesion resources after 2027. There are growing calls for the opening of a serious debate on how to ensure coherence among different EU cohesion instruments, as well as which approach can deliver on EU objectives in a world where shocks have unfortunately become not only more frequent, but also more varied in nature.

Based on a selected sample of six member States (France, Germany, Croatia, Greece, Spain and Italy), the European Court of Auditors (ECA) assessed the suitability of the RRFs for each of these countries, the guidance provided to each Member State and compliance with the RRF regulation. Overall the ECA’s felt that the Commission’s assessment was generally appropriate, given the complexity of the process and the time constraints. However, the ECA highlighted a number of weaknesses in the process and that risks to the implementation of the RRF remain.

The CoR too is preparing an opinion on the implementation of RRF following its earlier work and the publication of the European Commission’s Review report. We wait to see whether or not, a year on from its last opinion, the CoR now believes that the implementation of the RRF will enable important public funds to properly reach the needs of our communities, municipalities and regions. The CoR will adopt its opinion during the plenary session in February 2023.