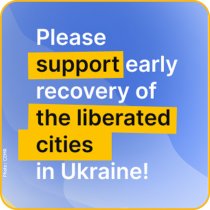 'Together we can do more’ - Dobrobat NGO

"For the city of Irpin, which stopped the enemy army on its approaches to Kyiv and was the most affected by hostilities in the region, "Dobrobat" volunteers have long since become not just reliable partners, but true friends.” This is how the mayor of Irpin, Oleksandr Markushyn, described the volunteer movement Dobrabat and its importance for his community.

On June 19, a Memorandum of Cooperation was signed between the city of Irpin, represented by its mayor and the funders of Dobrobat, Victor Andrusiv and Rostyslav Smirnov. Since then, over 30 houses have been repaired and saved thanks to the work of Dobrabat’s volunteers who are cooperating with the city’s communal services. “When half of the city is destroyed, and there are simply no funds to attract commercial construction companies in the local budget, the work of Dobrobat volunteers is worth its weight in gold for us. And if we talk about it on the scale of a country that is at war, then even more so! Funds should now go to defense to protect against the aggressor!”

Dobrobat is a volunteer movement rebuilding homes and infrastructure in liberated cities that have been destroyed by the invading russian forces. Volunteers remove debris and renovate buildings to make them inhabitable again. Besides the obvious practical benefits, the project carries a strong symbolic meaning of national unity harnessing Ukrainians’ grassroots horizontal organisation and mutual help. The Dobrobat volunteers are a bridge between the state and the Ukrainians who are suffering due to hostilities, as they work with both the state institutions and local authorities. For instance, in Yahidne village, they are restoring 22 houses in partnership with the Ministry of Territories and Communities Development of Ukraine. On July 13, 2022 the Prime Minister Denys Shmyhal visited the village of Yahidne and praised Dobrobat support in the restoration of residential buildings and infrastructure.
The Dobrobat volunteers have already helped the Ukrainians in 30 settlements of Chernihiv, Sumy, Kharkiv and Kyiv regions (repaired windows, roofs, doors, removed debris on the territories of hospitals, schools, kindergartens, parks, private houses). Today Dobrobat has received 37,000 applications from the volunteers from all over the country who are ready to come to the liberated cities to work there. From those, they have engaged 7 000 volunteers who are helping the reconstruction of their country as well as learning a new trade that can help them in the future. Despite the already 300 trips that have been organized within four months, requests from settlements are still flooding in.

To be as effective as possible, a map was developed to register private and public buildings that need to be repaired, with detailed pictures and estimated work. This map is available in English to widen the potentials of donors for the organisation that deeply need financial and logistic support. To ensure transparency they will provide a report on how the donated funds have been used with photos of the renovated building. Every donor knows exactly what their donation helped restore.