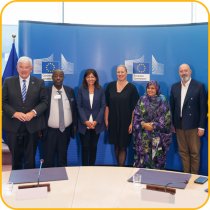 The presidents of the five largest associations of local and regional governments met yesterday (12 September 2022) in Brussels with Jutta Urpilainen, European Commissioner for International Partnerships, to renew their partnership on international development with the European Union.

Cities and Local Governments – Africa (UCLG-A)
The five presidents signed new Framework Partnership Agreements with the European Union for a period of four years. These Agreements notably provide financial support to local and regional government associations to formulate policies promoting sustainable development internationally, with a budget of €50 million under the NDICI-Global Europe programme.
The Agreements also reinforce the role of the associations in coordinating the voices of all development partners at the local level. In addition to the aid for the associations, local and regional governments' development efforts will also be supported “on the ground” by €500 million, said Commissioner Urpilainen. These funds directly help cities and regions tackle global challenges such as climate change, rising energy prices, gender equality or democracy at the local level.
“We believe that decentralised cooperation is essential to keep the communications’ channels open and to mutually enrich our practices,” said CEMR President Stefano Bonaccini. “The European Union can count on us to implement reforms contributing to democratisation of our territories and to the dynamisation of our economies.”
The five associations “committed to strengthening local and regional governments in Europe and in third countries”, in particular to implement Sustainable Development Goals aiming “to make cities and human settlements inclusive, safe, resilient and sustainable and revitalise the global partnership for sustainable development.”
The first Framework Partnership Agreements between these five associations and the European Union were previously signed seven years ago.
The presidents were accompanied by the respective secretaries-general of the associations and met with other senior EU officials, including Koen Doens, Director-General of the European Commission’s Directorate-General for International Partnerships (DG INTPA).
Check all pictures of the event
Watch the recording of the ceremony
Watch the video interview of the presidents of local government associations