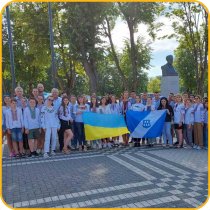 On 8 August, the 10-day summer camp for Dolyna Municipality (Ukraine), organised by the Šiauliai District Municipality, came to an end. 36 children from Dolyna municipality, accompanied by 4 adult educators, camped in a children's summer camp near Lake Elongatis in Švenčionys district and by the sea in Melnragė.

Children from Dolyna municipality camped from 29 July to 5 August in the "Sunny Krantas" camp near Lake Pailgio in Švenčionys district. Here, the Ukrainians, together with other campers, participated in various activities, sports competitions and educational activities. As many of the children were visiting Lithuania for the first time, their camp manager Greta organised study trips to Trakai, Kernave and Vilnius for the Dolyna delegation. For three more days, the Ukrainians camped by the sea in Melnragė, enjoyed the beautiful beaches of the Baltic Sea and visited Klaipeda. On the way from the camp in Švenčionys district to the camp on the seaside in Melnragė, the Ukrainians went to Šiauliai district - they really wanted to see the most beautiful and famous places in Šiauliai district as well as meet its leaders.

First of all, the Ukrainian bus went to visit the world-famous Hill of Crosses, located in the Šiauliai district. Impressed and surprised by one of the most famous and visited sacred place in Lithuania, the Ukrainians erected a cross on the Hill of Crosses for Ukraine to win the war. In this delegation were children whose parents are fighting or have died in the brutal war that is ravaging their country.

The Ukrainians came to Kuršėnai, to Laurynas Ivinskis Square, wearing traditional national clothes - "vyšyvankas". The children from the town of Dolyna and their educators Victor Yatskiv, Olha Listkova, Iryna Krekhovetska, Mariana Boberska were welcomed by the mayor of the Šiauliai district municipality Antanas Bezaras, his deputy Česlovas Spartas and his deputy Rita Žadeikytė.
Mayor Antanas Bezaras spoke briefly about the Šiauliai district, the guests presented the mayor with their drawings on the theme of friendship between Ukraine and Lithuania, which they created during their stay in the "Saules Bank" camp.

The guests were escorted to the Kuršėnai manor by taking one of the longest pedestrian bridges in Lithuania, where the history of the town of Kuršėnai was told, traditional "Kuršėnian" sweets and herbal tea were enjoyed.

Dolyna's children loved the Kuršėnai manor, and especially the welcoming owners of the manor, Alina Milašienė and Lina Šukienė, who not only welcomed the guests, fed them, but also told the history of the town and the Kuršėnai manor. To the hostesses, the Ukrainians sang Ukrainian songs and the anthem of the town of Dolyna as a token of their thanks.

After their stay in Kuršėnai, the guests travelled to Klaipeda, Melnragė. In Klaipeda, activities and sightseeing tours were organised for them. On 8 August, the guests returned to Dolyna. This trip for the children of Dolyna municipality is a gift from the Šiauliai District Municipality. The Municipal Council of Šiauliai District approved the cooperation between the municipalities of Šiauliai District and the town of Dolyna. On 12 July, the mayor of the Šiauliai district municipality, Antanas Bezaras, mandated by his municipal council, signed a cooperation agreement with Ivan Dyriv, mayor representing the Dolyna municipal council. The mayors of the two municipalities, at the signing of the contract, expressed their satisfaction with the fact that, even before the contract was signed, the municipalities of Šiauliai and Dolyna district were already connected by fraternal ties, which were established in autumn 2021 when they started to participate in the "Bridges of Trust" project.

The leaders of Dolyna Municipality stated that the significant humanitarian support of Šiauliai District Municipality and farmer Česlovas Karbauskis, contributing 1000 euros to the Gruzdžiai dispensary, for a total of more than 100,000 euros are an important sign of sincere friendship and an example to follow.

The summer school has been supported by the U-LEAD with Europe programme, a multi-donor action of the European Union and its member states (Germany, Sweden, Poland, Denmark, Estonia and Slovenia).