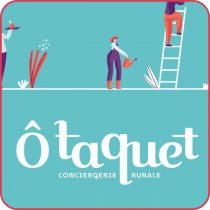 Already popular in large cities, conciergeries provide residents with a range of everyday services, from childcare to shopping deliveries to clothes alterations. The concierge service concept is also taking root in rural areas, as shown by the example of the Ô Taquet concierge service in Saint-Sauvant, France.

The Ô Taquet rural concierge service offers a multitude of services to all individuals, whether they are working or retired, alone or with their family. The aim is simple: to make life easier for the inhabitants of the commune. Elderly people who can no longer perform certain tasks or working people who lack the time to do some of their tasks particularly appreciate the establishment of such an initiative.

The Ô Taquet conciergerie was created by the association Solidarité Environnement Insertion (SEI).This association was founded in 2011 by a small group of inhabitants who wanted to contribute to the local development of Saint-Sauvant while facilitating the integration of people.

The establishment of the concierge service has had multiple beneficial effects for the territory. First of all, it creates a social link between people in social difficulty and those who have the means to hire them. In addition to creating jobs, the concierge service has increased the activity of local businesses. In this sense, Ô Taquet represents a real public service for the village.