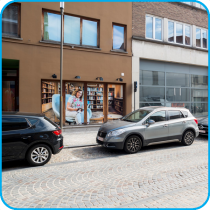 Mechelen. A middle-aged woman dressed in light colours sits in a public library. It seems like someone interrupted her while she was reading a book, but she does not mind. She looks straight ahead, and you immediately feel there is a story to tell behind those warm brown eyes.
This is Farida, a woman, a mother of three children, a grandmother of five, an accountant. She speaks five languages, likes to cook and loves to read. She lives in Mechelen, but fled from Syria years ago: she is a refugee. Her picture, placed on a window near the public library in Mechelen was part of the 'People Make the City' exhibition and Farida's story is just one of many in the series.

'People Make the City' is a storytelling project that translates residents' experiences into public content such as street art, podcasts, exhibitions, images and texts, building a more nuanced narrative of migrants and refugees' impact on their local neighbourhoods. These features show the diversity and the rich multi-layered identities of people living in the local community.

The people concerned can co-create the way they want to be presented because it's up to them how they want their story to be told and where. Storytelling is a powerful way of strengthening social cohesion by promoting mutual understanding.

You can find out more about the People Make the City project and other good practices and tools on migrant integration from the OECD website.