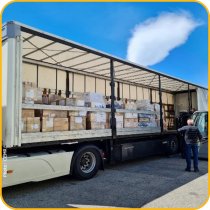 Slovenian municipalities are boosting deliveries of humanitarian aid to their Ukrainian partners. Under the Bridges of Trust initiative, the municipalities of Kočevje (partner of Bucha), Juršinci (partner of Avanhard) and Hrastnik (partner of Drohobych) have donated emergency goods. What’s more, the NGO Slovenska Filantropija, the secondary vocational school from Murska Sobota and private donors also contributed to this batch of humanitarian support.

The emergency goods have been primarily delivered to surgery rooms of hospitals in the East of Ukraine, to Bucha and to internally displaced people in Drohobych and Khust.

The head of the municipality of Hrastnik, Marko Funkl, personally delivered humanitarian aid to Drohobych and signed a memorandum of understanding with the municipal authorities. This document is the first step towards a large-scale inter-municipal partnership, including an internship programme for Drohobych municipal managers in Slovenia.

The municipalities met in the framework of the “Bridges of Trust” Initiative, implemented by Council of European Municipalities and Regions and PLATFORMA with the support of the U-LEAD with Europe programme.